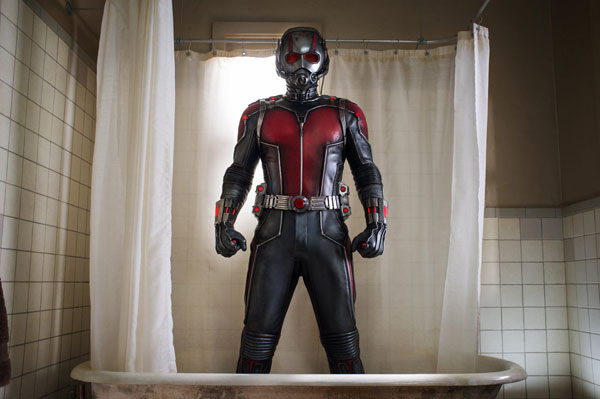 In our current age of obsessive entertainment consumption, there seems to be an Elizabeth Kübler-Ross model for how we deal with the cycle of carefully parsed out (or sloppily leaked) news of any given project as it progressively comes to fruition, from the continuation of a beloved film franchise to the abrupt cancellation of a TV show. Stage 1) Denial: Firefly will return. Stage 2) Anger: Ben Affleck will never be my Batman. Stage 3) Bargaining: Well, the new Star Wars film has to be good because they’re using practical effects. Stage 4) Depression: My life will never be the same without Firefly. Stage 5) Acceptance: Ben Affleck is the new Batman, and I’m okay with that (seriously, though, it’s going to be fine, people). All this and more has enmeshed Marvel’s Ant-Man film, a long-gestating project that saw the unconventional casting of Paul Rudd as the titular superhero (denial!) and the subsequent departure of beloved writer/director Edgar Wright from the project due to creative differences (anger!). But, I am here to say that you can eschew stages three and four, and land on the fifth, because Ant-Man is a breezy, funny, well-crafted summer confection that more than makes up for the bloated, overwrought, other Marvel Universe entry from earlier this summer: Avengers: Age of Ultron.

Rudd is Scott Lang, an electrical engineer-turned-thief (of the Robin Hood variety, of course) who, as the film opens, is released from prison into the arms of Luis (Peña, who will be lauded as stealing every scene he is in, quite rightly), a fellow ex-con who, with pals Dave (T.I.) and Kurt (Dastmalchian), have a hot tip on burgling (not robbing, mind you) some old guy’s house. That old guy ends up being Dr. Hank Pym (Douglas), a scientist responsible for discovering the Pym particle, which can shrink anything to miniature size. Pym retired after Darren Cross (Stoll) took over his company, and Cross seeks to militarize Pym’s invention into an army of miniaturized soldiers dealing death on the battlefield (an exhausted plot point in these movies, to be sure). Pym enlists Lang to don his experimental suit – one that enables him to shrink to minuscule size at will and also command an ant army via some Bluetooth-like gizmo – in order to retrieve Cross’ miniature army suit, dubbed Yellowjacket. Many hijinks ensue in what is ostensibly a heist film, and Rudd’s disarming charm is the perfect antidote to the self-seriousness of recent super antiheroes. It is Marvel’s first straight-up comedy, and thankfully, it works.

I’ll leave the parsing out of the film’s authorship to the folks who care about such things, but Ant-Man has a casual, light-hearted tone that is refreshing in a Marvel Universe that endlessly destroys entire cities for spectacle. The climactic battle offers a clever subversion on that trope by setting it in Lang’s daughter’s bedroom (following a brief, hilarious battle that takes place within a briefcase). It is a perfect instance of meta self-awareness that thankfully lets a little air out of this grand narrative pomposity. Ant-Man is infectious, silly entertainment, a popcorn flick that knows what it is and does what it does to an intoxicating degree.