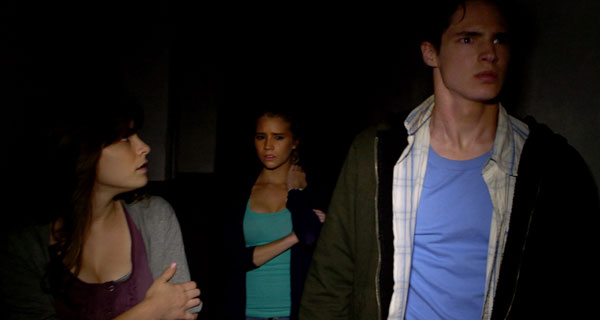 Consider the found-footage horror film. Scoffed at by some as a cheap narrative gimmick, it has nonetheless become a quite popular subgenre, although I suspect that has more to do with a movie studio’s bottom line than anything else. 2007’s Paranormal Activity was shot for around $15,000 and subsequently earned Paramount Pictures almost $200 million. Blumhouse Productions produced that film, and continues churning out sequels (the sixth one drops this fall) as well as producing the Sinister and Insidious franchises. And they have now released The Gallows, a potential new series based on shaky footage, endangered teens, and a bogeyman who dispatches his victims with a noose. Except The Gallows offers exactly none of the frisson or pleasure of a found-footage film done right.

Imagine the most obnoxious, annoying teenager in your high school, one who vomits a constant stream of bullying sexist commentary to fill the void of silence (or in this case, plot exposition). Multiply that by 10 and you have Ryan (Shoos), a football-playing dudebro who is stuck taking drama (it’s apparently a requirement) for a semester at a Midwestern high school. In charge of documenting the production of a play being put on (also called The Gallows), he likes to wield the camera in his off-time, too, shoving it into the face of his girlfriend Cassidy (Gifford), and friend Reese (Mishler). Reese is the lead in the play – which, in the few scenes we’re shown, appears to be a riff on The Crucible/The Scarlet Letter, as penned by a 6-year-old – and he has a secret crush on his leading lady, Pfeifer (Brown). But the play is possibly cursed, you see, for when it was first performed 20 years ago, an actor, Charlie Grimille (Cross), was accidentally killed during the performance when he was actually hanged from the gallows onstage. But hey, NBD, let’s put on the play again as a memorial.

When a series of plot contrivances way too overwrought to describe here have our four leads stuck in the school the night before the play’s opening, the film opens its jump-scare bag of tricks. Creaky doors, spooky lighting, disorienting camerawork, convenient power outages, and wonky cell-phone reception all factor into an evening of screaming bodies being dispatched by the ghost of Charlie, now wearing a hangman’s mask. Or is it? The final plot twist will have you simultaneously scratching your head and working out math problems that don’t add up. For a similar and more rewarding experience, I would recommend contracting food poisoning, dropping acid, and crashing the nearest frat party.