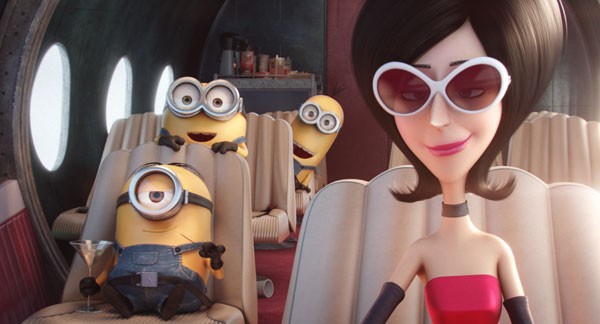 Toddler-tiny, banana-colored, and clad in denim bib overalls and vaguely steampunk goggles, Minions don’t look like leading men. They don’t sound like ’em, either, as they gibber away in a polyglot pidgin of English, Spanish, and French and search high and low for a dastardly master to serve. Just five years ago, Minions were mere background noise in the kiddie cartoon Despicable Me. Now here they are starring in their own vehicle. That’s a rags-to-riches story to rival Lana Turner at the Woolworth’s lunch counter.

Just kidding. Minions exists because a media megacorp required a fresh way to tap cash from the Despicable Me concept. But to the credit of the filmmakers, Minions doesn’t play cynically. It’s a slight, bright, bopping entertainment.

Like a child – its target demo, after all – nothing holds the film’s attention for very long, which means it squanders clever setups, including a lock-in at a New York department store (what fun it could have had with a Mixed-Up Files of Marshall Field’s!) and a kooky VillainCon gathering that’s over in the blink of an eye. But the fleetness of the script by Brian Lynch – who also wrote next year’s The Secret Life of Pets, the trailer for which killed at Tuesday’s sneak screening – mostly works in the film’s favor. No gag gets overlavished, no plotline overstays its welcome. The film is also set, somewhat arbitrarily, in 1968, which inspires some nifty retro looks (egg chairs, mod suits) and overplayed hits from the Kinks, the Doors, and the Who.

The foregrounded animation of the heroes and villains is well-executed, although the mouth movements of supreme baddie Scarlett Overkill don’t always seem to match with Sandra Bullock’s vocal work, and the background detail, like a photorealistic brick wall, is exquisite. Best yet, there’s a mid-film bedtime story, made to look like stop-motion, that’ll take your breath away. 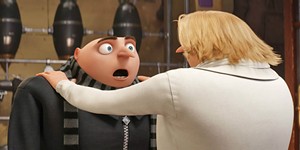 Despicable Me 3
Animated franchise confirms the law of diminishing returns