Writer/director Maya Forbes decided to go the semiautobiographical route for her first film as a solo director. It’s easy to understand why this professional screenwriter looked inward after co-authoring scripts for the popular but creatively impersonal kids' features Diary of a Wimpy Kid: Dog Days and Monsters vs. Aliens (although plenty of grownup fare can be found in her résumé, too, including a stint on The Larry Sanders Show). With Infinitely Polar Bear, Forbes has created a warm family portrait, even though it sugarcoats the specter that mental illness casts on this group’s well-being.

It helps tremendously that the bipolar character is played by Mark Ruffalo, whose acting skill and sensitivity add untold reservoirs of depth to every role in which he is cast. Ruffalo here plays Cam Stuart, husband of Maggie (Saldana, awfully good) and father of two pre-adolescent girls, Amelia (Wolodarsksy) and Faith (Aufderheide). Amelia (who is Forbes’ real-life daughter) narrates the film, which is mostly told from the kids’ perspective. Set sometime in the mid-Seventies, the film shows the early love between Cam and Maggie through what seems like old home movies. Even though Cam received his diagnosis before they met and fell in love, Maggie married him anyway because she thought everyone in the Sixties was crazy and having breakdowns. Born a Boston blue blood, Cam’s inability to hold a job drives the family’s downward mobility, and the couple’s interracial status, though largely unmentioned, does not help them in getting ahead in life. So Maggie applies to Columbia Business School and gets in with a scholarship. Her plan is to move to New York and come home on weekends, while Cam stays in Boston to mind the girls for the 18 months that the program will take to complete.

Cam’s girls become subject to the mania and depression that marks bipolar disorder. He is like a big kid and can be a lot of fun, except for the times when he is an irresponsible guardian who creates dangerous and unhealthy situations for his children. Mostly, he’s portrayed as a big, lovable goof, whose resilient family learns to roll with the punches. If the scariness of Cam’s illness is portrayed through rose-colored glasses, the realism of the characters shines through in dozens of other small ways. And, hey, we all had moments of wearing pastel-lensed glasses in the Seventies. 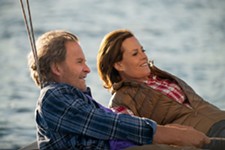