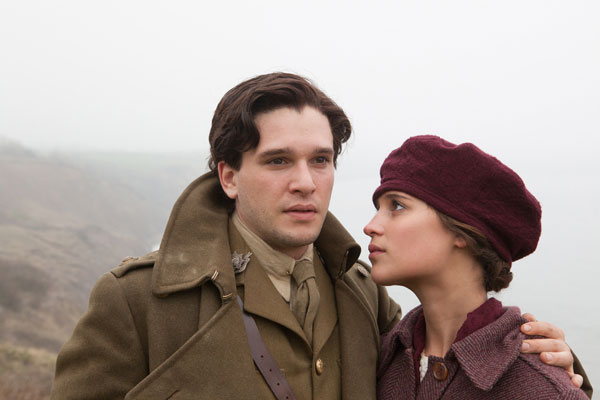 Ingrid Bergman never lost her Swedish accent, but she conquered Hollywood anyway with her luminous composite of fragile and steely. Alicia Vikander – Bergman’s countrywoman and a strong candidate herself for international stardom – already has the accent problem licked; so far she’s worked her stunningly beautiful mouth around the language of a Danish queen (A Royal Affair), a killing machine of American provenance (as the chilling Ava, she was Ex Machina’s ace in the hole), and now a British volunteer nurse, in this adaptation of Vera Brittain’s bestselling memoir about World War I.

Testament of Youth opens near the end – rather the default framing device for historical pictures – with Vikander’s Vera pushing her way through an ebullient Armistice Day crowd in 1918. Vera is grim-faced; you get the sense that the end of the war has come too late for her. The film then skips back several years, to before the war, with Vera locked in a different kind of battle with her loving but conventional father (West): She insisted she was destined for Oxford and a writer’s life, not boring old matrimony. Her devoted brother Edward (Egerton) supports her ambitions, as does his friend Roland (Harington, eye-poppingly clean-shaven after so many years playing Game of Thrones’ furry Jon Snow). That Roland wants to be a poet, just like Vera, is just one of the ways they bond, and catch each other’s breath.

Testament of Youth is being marketed as a romance, which isn’t false advertising, exactly; Vikander and Harington are moving as a young couple whose nervous courtship must turn galloping once war is imminent. But the romance is, rightly, in service of a larger narrative: that of Vera’s coming of age, and her coming into a philosophy of pacifism, which would define her life’s work. Her experiences behind the front line (she was stationed in France and Malta) were instrumental to that, and director James Kent (The Secret Diaries of Miss Anne Lister) and script adapter Juliette Towhidi (Love, Rosie) give her war work due screen time. It’s muddy, bloody, and studded with amputated limbs, yet still rather generic-feeling; it lacks the visceral impact of Joe Wright’s version of  Western Front atrocities in Atonement. But there’s nothing lacking in Vikander’s stubborn, compassionate performance. Vikander’s got five more movies coming out in 2015 alone. With a dimmer screen presence, you might worry about burnout, but not with her. I don’t think any of us are going to get tired of watching her anytime soon.