The self-isolating A.J. Manglehorn (Pacino) floats through life like a ghost. He moves with the weightlessness of a man intent upon avoiding the encumbrances of human relationships. An aging locksmith eking out a living in a small Texas town (note the Austin locations) where he once coached Little League baseball, this loner-by-design channels all of his affection and devotion to his beloved long-haired cat, Fanny. She is his constant companion, accompanying him on afternoon fishing trips and providing him an audience for a litany of entreaties. The time spent with her is easily his happiest. This stubborn eccentric reserves his emotional life for a woman he foolishly lost many years ago, endlessly writing lovesick letters to her, all of which always come back unread. (The red ink of the “Return to Sender” stamp marking those futile missives might as well be the blood from a wound that won’t heal.) It’s Manglehorn’s magnificent obsession: writing (first in his mind, then on paper) the next letter to Clara, a letter that’s no different from the hundreds and hundreds of unanswered ones preceding it. And yet, he remains steadfast in his belief that this next letter will be the one to rectify the mistakes of the past. Is it love or lunacy? As always in affairs of the heart, it’s little of both.

It’s difficult to distill the substance of Manglehorn, given the film’s narrative sparseness. Nothing much happens, and when it does, the drama is low-key, the story arc subtle. Yet, there are some powerful moments here, all of which involve the three people with whom the principal character has limited social interactions: the self-styled homie, Gary (Korine), an ex-drug addict breaking into the tanning-salon business (read: massage parlors), who idolizes his old coach for the loyalty demonstrated over the years; Jacob (Messina), the estranged son and successful investment banker embittered by his father’s inability to connect on a paternal level; and Dawn (Hunter), the sunny bank teller who processes the lock-and-key company’s weekly deposit each Friday, a woman who’s attracted to Manglehorn despite himself. All three actors in these supporting roles are terrific, particularly Hunter in a heartbreaking scene in which Dawn expresses her humiliation upon realizing their cafeteria dinner date is a not a romantic one.

But, of course, this is Pacino’s show from start to finish, and the old lion roars (not in voice, but in being) with the quiet anguish of someone struggling to once again dwell among the living. Granted, the slippery accent doesn’t resemble anything heard in the Lone Star State, but Pacino captures the man’s tormented inner life so vividly with his physical presence (aided by director Green’s visual imagining of such) that those vocal inflections are forgivable. While Manglehorn eschews the traditional third-act redemption you’ve seen ad nauseam in films that neatly wrap things up right before the end credits roll, it’s nevertheless refreshingly optimistic about people’s ability to change. For any of us entering life’s third act, hope springs eternal.

See “An Ungentrified Man,” July 3, for an interview with the director. 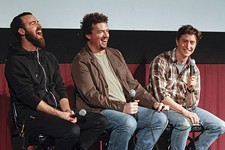