For a sequel no one really asked for, Ted 2 delivers the profane, politically incorrect, comedy fool’s gold better than you’d expect. Hankering to see Marky Mark and the furry bunch covered in gallons of black men’s semen? You’ll either laugh out loud or gag – okay, both – at Family Guy and American Dad creator MacFarlane’s icky, sticky bukkake riffage. Are you dying to see Star Trek: The Next Generation’s Michael Dorn attend Comic-Con costumed as his Klingon character Worf? Yuks aplenty for you here. And then there’s Ted, the living teddy bear (voiced by MacFarlane), who continues to wake ’n’ bake with his best bro John (Wahlberg) in between marital spats with his hottie human wife Tami-Lynn (Barth). What’s different this time out? Ted 2, it turns out, is very much of the moment.

Coincidentally or not, Ted 2 revolves around issues of civil rights, interspecies relations (slyly subbing for puritanical America’s boiling LGBT and racial divisions), and what, exactly, defines personhood. When teddy bear Ted and human Tami-Lynn decide to have a baby to save their faltering marriage with the support of BBF John, the trio runs afoul of practical physiological matters – Ted isn’t exactly anatomically correct – and the court system. Attempts at getting a sperm donor raise certain governmental red flags, and Ted is declared to be not a person at all, but, indeed, property. Enter, weirdly, predictably, Morgan Freeman. But before that, enter John’s emergent love interest, fledgling attorney Samantha (a very game Seyfried). Armed with volumes of legal texts ranging from the Dred Scott case to the Scopes monkey trial, Samantha aims to prove that this foul-mouthed little bundle of horny, ganja-loving, Beantown bombast is more human than he looks. The outcome is no great surprise, and plenty of the gags feel as though they were meant to be throwaways, but Ted 2, exactly like its predecessor, has plenty of heart, which makes all the rest of the black-dick jokes marginally more tolerable. (As an added bonus, you get Morgan Freeman telling the audience he’s going to “go fuck myself now.” It’s difficult to top that.)

My respect for MacFarlane doubled (at least) when he signed on to executive-produce the reboot of Carl Sagan’s groundbreaking PBS series Cosmos, this time hosted by the ultra-personable astrophysicist Neil deGrasse Tyson. MacFarlane’s skeptical-humanist allegiances have long been a subversive staple on his admirably deranged animated series, but taking science to the masses via the Fox network was a wicked-smaht coup that would have made even Sagan chuckle.

That same stream of cultural bravery pops up all over the place in Ted 2, so kudos to MacFarlane for keeping a certain thread of sanity alive in a milieu that concurrently demands willing suspension of disbelief. Ted 2 isn’t the stony-but-quick-witted revelation that Ted was, but it’s close enough to make you want to smoke a fatty and hit the theatre.

A Million Ways to Die in the West
Seth MacFarlane furthers his Hollywood onslaught with this Western spoof in which he's no longer strictly a voice talent but is now playing the onscreen lead. 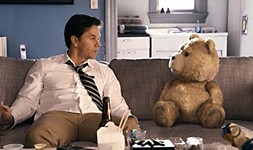 Ted
Mark Wahlberg and the teddy bear he willed to life as a child stay BFFs into adulthood in Seth McFarlane's zany first foray onto the big screen.