Me and Earl and the Dying Girl

Director Alfonso Gomez-Rejon’s large-hearted Me and Earl and the Dying Girl found a lot of champions at its Sundance premiere – it took home both the Audience Award and the Grand Jury Prize – but his teen indie dramedy has since been met in some corners with a critical loathing nearing defcon Crash; one critic recently called it “appalling,” while another proudly declared she flipped it the bird as the credits rolled. Why the pile-on? Much of the hate seems to stem from the film’s constricted POV – that of a 17-year-old white guy from the suburbs of Pittsburgh – but it’s not like the filmmakers are being coy about the prejudiced perspective. It’s literally spelled out in the title: “Me.” Does cinema need more stories wherein “me” doesn’t automatically mean “white male”? Sure. Absolutely. That’s a battle worth fighting. But I wonder why the cultural criterati has designated this particular film their theatre of war.

This film is sweet and frequently very funny. It isn’t perfect. Some of those imperfections – or, more to the point, irritants, such as the twee chapter headings and college-essay framing device – are carryovers from the YA novel, written by Jesse Andrews, who also adapted the novel to screen. Book and film both are narrated exclusively by a teenage bundle of neuroses named Greg (Mann). He hates his “weird rodent face” and figures the only way to get out of high school alive is to be the semi-invisible guy who is neither friend nor foe to anyone.

Then a distant classmate named Rachel (Cooke) is diagnosed with leukemia, and Greg’s mom (Britton) forces him to pay a sympathy call. Greg acts like a dumbass, but he makes Rachel laugh, in a welcome contrast to everybody else’s Hallmark-card condolences. So he keeps visiting, and keeps making her laugh. Eventually, he brings over his best friend Earl (Cyler), only Greg can’t even admit Earl is his best friend; he calls him his co-worker, because they make movies together – amateurish parodies of classic films. (Sock monkey and fake mustache ingenuities bearing names like Pooping Tom and Anatomy of a Burger, the spoofs are a fun in-joke for cineastes.)

The first time the film introduces Earl, who is black, Greg mentions via voiceover that Earl comes from a tougher neighborhood and less stable home life than Greg. That’s about as far as Greg gets into it. His lens on Rachel’s life is just as limited; you can see his brain registering her Hugh Jackman obsession and the heavy wine pour her distraught mom (Shannon) favors, but those are just two data points from a complex, mostly uncharted well of information about Rachel’s rich inner life. The argument has been made that Me and Earl plays with two of modern film’s most egregious stereotypes-slash-shortcuts to a white lead’s epiphany: the Magical Negro and the Manic Pixie Dream Girl. But I think that misses the point – which is that the film is faithfully reproducing the tunnel vision of its 17-year-old protagonist, who is, as was previously established, a dumbass. Yes, the movie is about Greg’s journey to becoming a little less of a dumbass, and, yes, Earl and the Dying Girl are instrumental in getting him there. But isn’t that what friends are for? Even with their disproportionate screen time, all three young performers give exceptional, rounded performances. We may not see the fullness of their lives, but they make them full-feeling anyway.

See "Alfonso and Thomas and The Dying Girl," June 26, for related interviews. 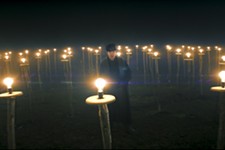