Malcolm (Moore) is caught in the middle. Growing up and going to high school in the Bottoms, the roughest area of the black community of Inglewood, Calif., hasn’t been easy for Malcolm and his best pals, Jib (Revolori, the bellhop in The Grand Budapest Hotel) and Diggy (Clemons). They’re nerds who are focused on getting good grades and attending Ivy League colleges, and geeks for Nineties hip-hop culture, BMX bikes, Game of Thrones, and other things associated with white tastes.

Appearing at first like a coming-of-age movie, Dope quickly transitions into a peppy caper film as writer/director Rick Famuyiwa throws in a little bit of everything so that Dope moves along at a rapid clip and allows little time for reflection. Life in the Bottoms is “a daily navigation between bad and worse choices” explains Malcolm: By demonstration, one day Malcolm, Jib, and Diggy bike past the neighborhood drug dealers in order to avoid the gangbangers on another street. Lured in by Dom (A$AP Rocky), Malcolm acts as a go-between to deliver a message to Dom’s would-be girlfriend Nakia (Kravitz), who turns out to be struggling with some math problems. That’s how the three high schoolers end up at Dom’s birthday party, where a raid sends everyone scrambling, and the next day Malcolm discovers drugs and a gun in his backpack where books ought to be. Thus begins the caper.

With Dom in jail, the kids decide to sell the MDMA themselves online, using Bitcoin for payment. Amusing sequences with the white dreadlocked hacker they met at band camp (Anderson), and a scene-stealing Molly moocher (Iman) pay off handsomely. Other sequences, such as the Risky Business-like throwback to an interview with a Harvard interviewer, are less satisfying. The third act tends to get a little preachy, and the film ends with Malcolm orating full-on to the camera. Although there are too many story strands thrown in for good measure, Rachel Morrison’s cinematography and Lee Haugen’s editing keep the film fluid and buoyant. The ubiquitous Pharrell contributed music to the film and is an executive producer, and Forest Whitaker is also a producer and serves as the story’s narrator. Messages about learning to be comfortable in one’s own skin and the hypocrisy of the ruling class are delivered with genial humor and mild pokes. Curiously, the tone of Dope is at a far remove from the gritty world portrayed in films like Boyz n the Hood and Juice, works grounded in the Nineties hip-hop culture that Malcolm so loves. 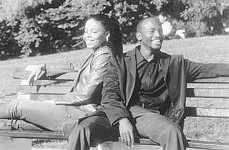 Brown Sugar
Brown Sugar's opening credits play out to the Roots' “Act Too (Love of My Life),” with its thrumming, soulful chorus of “Hip-hop, you the love ...