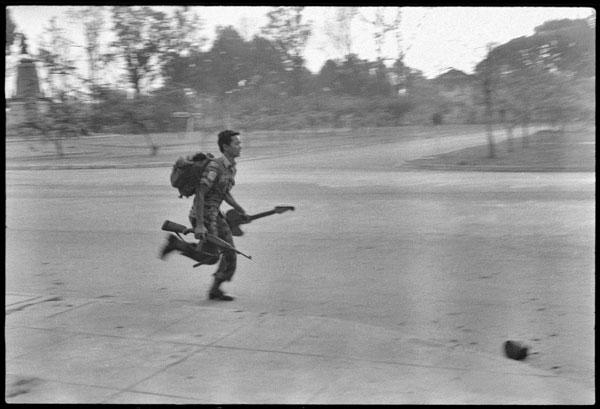 Far from being just a musical survey of 20th century Cambodian music, Don’t Think I’ve Forgotten achieves a much loftier goal of cataloging the cultural history of a country fraught with conflict and genocide, with its musical past acting as a grounded through line from the Fifties to the late Seventies. John Pirozzi purportedly spent nine years gathering material for the project, and the film spotlights musicians and performers who would have been completely forgotten if not for this enterprise.

We begin with Cambodia’s independence from being a French colony in 1953, that country still having a cultural sway over the music of the day. Soon, Afro-Cuban and American doo-wop start to influence the sound, and all of a sudden it’s 1965 and the U.S. has engaged with Vietnam, and here comes the unrelenting swagger of rock & roll to fuck everything up. There follows an innovative musical renaissance until 1975’s arrival of the brutal regime of the Khmer Rouge and Pol Pot sends the country into a cultural tailspin, with musicians and artists being slaughtered outright, as others go into hiding to avoid being “disappeared” by “authorities.” It is heartbreaking and traumatic to hear the survivors of Pol Pot’s regime talk about their friends’ fates and how many talented people were needlessly slaughtered. And that is where Pirozzi’s film transcends a mere paint-by-numbers cultural survey of a country’s musical history. It resurrects the lost and extremely talented heritage of an age of artists and musicians that an oppressive government once sought to obliterate. It is an invaluable document of a country and a culture that for too many people are probably just historical footnotes. A film not just for the musically obsessed, Don’t Think I’ve Forgotten is a poignant and an important reminder that art matters, especially when one is facing the abyss.

See "Combat Rock," June 19, for an interview with the director.