Well, it’s better than Jurassic Park III, I’ll give them that. This fourth film in the franchise has more than a few snazzy beasties going for it, and the CGI is light years away from the crumpy-cute brontosauruses of Spielberg’s monstrously entertaining 1993 original. The skin tones and rolling musculature of the 20-odd species of DNA-recombinant dinosaurs seen here glisten and flex with all the natural physiology of how paleontologists currently believe the real things would appear. The same, however, cannot be said for the storyline (which, as in 1993, should stop no one from going to the theatre). Penned by a bevy of screenwriters and shunted all over the place in the intervening years since we last watched Jurassic Park III’s pterodactyls take wing, Jurassic World relies far too heavily on the tried and true and decidedly cliched – from its young protagonists Gray and Zach (Simpkins and Robinson), who are vacationing in the allegedly “safe” (yeah, right) corporate theme park of the title only to find themselves pursued by, well, you know, to a scheming military evildoer who plans to use velociraptors in lieu of American boots on the ground in upcoming conflicts. “Robots?!” scoffs D’Onofrio’s ham-on-wry baddie: “This is the future of war!”

He does have a point, since ex-Marine Owen (former guardian of the galaxy Chris Pratt) appears to have trained these bitey, scrambling eating machines to follow orders to a small extent using, of all things, a dog clicker and a pail of dead rats. Noms! Pratt pulls double duty here (and does it charmingly) as one of the film’s requisite love interests. The other half is Howard’s Park Manager Claire, a Type-A control freak who manages to misplace her own nephews, Gray and Zach, once the park’s newest attraction busts loose and turns out to have far more intelligence than your average Jurassic hybrid. Dubbed the “Indominus rex,” this 50-foot mass of razored teeth and predatory rending lays predictable waste to everything and everyone around it, leading to a final, finally rousing third act that actually merits the word “spectacular.” Not so for the rest of the film, sadly.

Director Trevorrow previously helmed the quirky-cool, indie time-travel film Safety Not Guaranteed, and his roots show through as corporate America, product placement and branding, and the amoral corruption of scientific breakthroughs by mankind’s more martial and profit-driven impulses are skewered, snarked, and railed against at every turn. Spielberg, reportedly a very hands-on exec producer, allows for a few moments of flashback tomfoolery to his earlier films, notably a pair of gags involving a great white shark and, later on, a couple of oxygen tanks used to foul up the advance of an impending Jurassic attack. Bigger isn’t necessarily better, though; he knows this, one must assume. Indominus rex may be fearsome, but the behemoth is ultimately brought down, like Kong, by love. That’d be Spielberg’s – and every kid in the world, to be honest – love for another, more archetypal monster, who shall remain unnamed here. It’s all in good fun, and critic-proof to boot, but Jurassic World doesn’t even come close to that most intimate and dearly coveted “Gosh, wow” sense-of-wonder that the original film mustered so easily. Roar more, bite less. 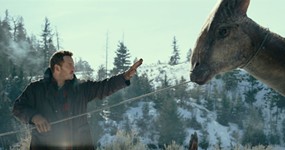 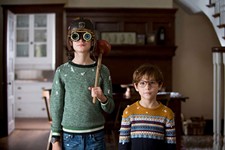