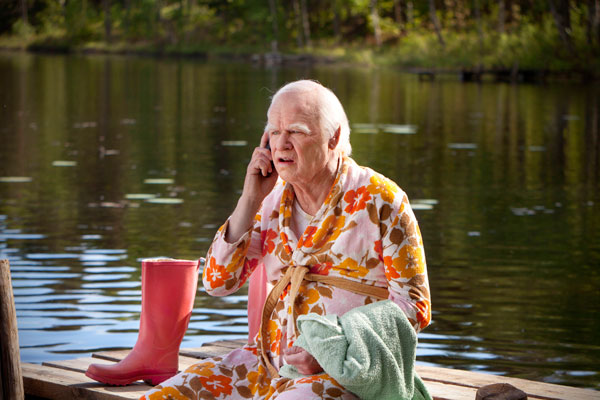 A whimsical comedy based on the bestselling Swedish novel (and book-club fodder) by Jonas Jonasson, The 100-Year-Old Man Who Climbed out the Window and Disappeared begins with exactly that, as Allan Karlsson (Gustafsson) escapes his retirement home on the day of his inauguration into the centenarian club with a “fuck this” attitude and little more than the slippers that bear his first name in Magic Marker. He shuffles off to the bus station where he buys a ticket to the next bus leaving town and inadvertently steals a suitcase with 50 million krona from some local thugs. He hooks up with a retired train attendant, Julius (Wiklander), and together they hit the road, picking up stray characters to add to their entourage while (often unknowingly) skirting the tattooed gangsters after that jackpot. One character owns an elephant. Another can’t decide on a career path, so has almost completed a half-dozen degrees. It is all very fanciful and droll, a mildly subversive and ramshackle Scandinavian version of the Grumpy Old Men on-the-road formula.

But that’s only half the story. Through flashbacks that seem to come whenever the present-day action hits a lull, we see Allan’s life unfold, and what a life that was. From his humble beginnings as the son of a revolutionary, young Allan develops a passion for blowing things up that parlays him into becoming a demolitions expert. There follows a stumbling and drunken shuffle through the history of the major conflicts of the 20th century (the film will be endlessly compared to Forrest Gump), as Allan travels to Franco’s Spain for the Spanish Civil War, helps Robert Oppenheimer develop the atomic bomb, pisses off Josef Stalin to the point where he gets sent to a gulag, becomes a double agent for the CIA during the Cold War, confers with Ronald Reagan, etc. Throughout it all, Allan is oblivious to the impact he has on world events, holding true to the theory espoused by his mother that “life is what it is and does what it does.”

These two narrative threads are constantly jockeying for dominance in a story that has a refreshing nonchalance, but is hindered by the lack of any tension whatsoever. Obviously better served as a novel, The 100-Year-Old Man… still entertains for the majority of its running time, but it feels like two separate movies, a dual shaggy dog story stitched together like Frankenstein’s monster, never breaking free of its quirky literary origins.