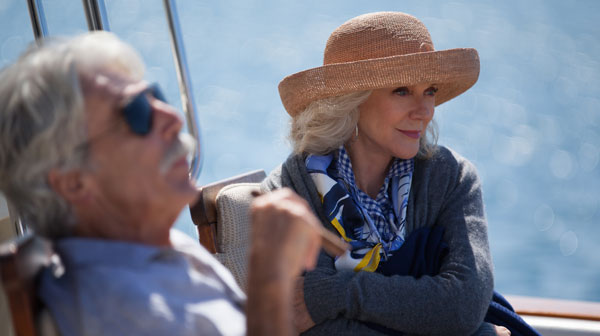 I'll See You in My Dreams

Old people and dogs are my Kryptonite, so I probably should have just closed my notepad and excused myself from critical duties when I’ll See You in My Dreams opened with both, snuggling in bed. Blythe Danner – now 72, and eternally luminous – plays Carol, a longtime widow particular in her ways and wary of anything that might complicate her routine, which involves long walks with her aging dog, garden work, golf, and cards with her best gal pals, who keep needling Carol to give up independent living and move into their comfortable retirement community.

A series of disrupters threatens Carol’s ordered living: an invading rat, a pool boy, a truly magnificent mustache. The pool boy is Lloyd (Starr), a thirtysomething failed poet who becomes Carol’s unlikely drinking buddy. The mustache is attached to a senior suitor, Sam Elliott’s Bill, whose seduction prowess is so smooth he might as well be whipped with butter.

I don’t know if I’ll See You in My Dreams is a great movie – but it moved me. It shouldn’t be such a novelty to see the interior life of a septuagenarian explored onscreen. What’s even more novel is that the script, cowritten by Marc Basch and director Brett Haley, mostly, if not entirely, avoids the more common, pat comedy of aging of the Grumpy Old Men philosophy. This is largely a movie about talking. Not monologuing, and not smirking about Viagra. What we see instead is like the real-life back-and-forth between new acquaintances, old friends. On the subject of the latter: The movie doesn’t make too big a deal out of it, but it does nicely depict the circle-of-life arc for elderly women – doomed by their gender’s longer life expectancy – to return to the female-friendship-primacy of childhood.

Danner gets to bounce off a lot of different people here, and I especially liked her rapport with Starr; they’re both underplayers, too self-possessed to pander. But Danner’s even better on her own, as she honestly, even angrily, wrangles with not a paradox, per se, just the raw rub of life: that it sucks to be alone, and it’s scary to try not being alone. She’s exquisite. 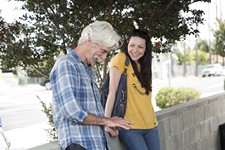