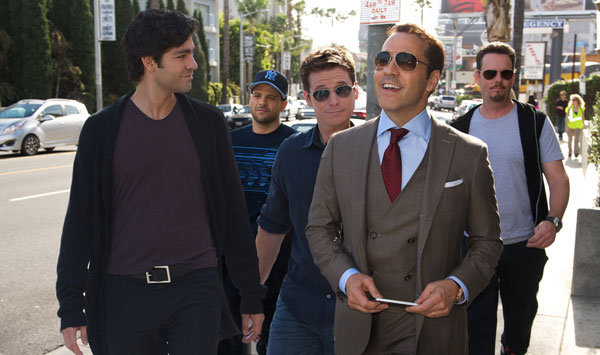 Surprising no one, the boys are back, effortlessly transitioning from the HBO small screen to cinema’s big screen. And for better or worse, the film plays like an extended TV episode, jumping from each character’s story arc to the next, rarely lingering longer than the time it takes to land a few low-bro love jabs before moving on to the next scene. It’s a completely unnecessary film, but hey, when has that been a Hollywood concern?

Entourage picks up merely days after the TV series ended. Last seen heading off to an impromptu wedding, Vinnie (Grenier) is partying in Ibiza after the marriage’s nine-day conclusion. His posse – manager Eric (Connolly), big brother B-actor Johnny Drama (Dillon), and driver Turtle (Ferrara) – speed-boat in to his side of the party yacht where Vinnie seems no worse for wear. Power agent Ari (Piven) is now a studio head and wants Vinnie to star in his new $100 million-dollar movie, which Vinnie insists on directing. Cut to eight months later, with shooting finished but the film in need of another infusion of cash to complete post-production. This requires sucking up to the Texas financiers – a tycoon (Thornton) and his louche son (Osment), both played as hick stereotypes – whose money is keeping the studio afloat.

Other than Turtle gaining wealth in inverse proportion to the weight he’s lost, not much has changed for the guys. They still chase booze, bongs, and babes, only now perhaps with an even greater sense of self-importance. Their bonds remain fully intact. Cameos abound throughout the film, but only a few make any discernible impressions: game Armie Hammer, a well-chosen Kelsey Grammer, Mark Wahlberg (also the producer of Entourage) making gratuitous references to both his Ted films and Wahlburgers reality-TV show, and Warren Buffett because, well, Warren Buffett?

Even as the HBO series ended, the show’s early skewering of fame and celebrity had been subsumed by more of a boys-beings-bros ethos. The same is true with the movie. Fans should find a certain satisfaction in the film’s closing scenes at the Golden Globes. But others will be appalled by the film’s casual misogyny and other retro attitudes. They’re the ones who might flee the theatre upon hearing the film’s first ghastly line of dialogue, delivered by the ever-benighted Johnny Drama. 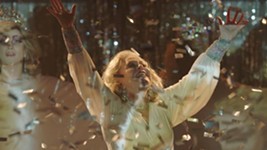 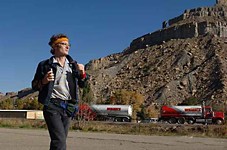 Adventures of Power
All Power wants is to be the best possible air drummer he can be.