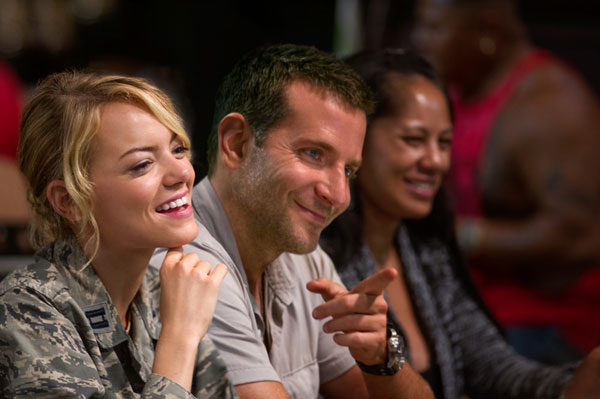 In the Hawaiian language, the word “aloha” has multiple meanings: affection, peace, compassion, and mercy, to name a few. Early on, the films of Cameron Crowe navigated those concepts with earnest, well-told stories about people on redemptive journeys of self-discovery, such as the sweet slacker hopelessly in love with the class valedictorian in Say Anything…, the cynical sports agent humanized by loyalty and love in Jerry Maguire, and the innocent teenage reporter exposed to the rock & roll life in Almost Famous. But lately, the quality of Crowe’s work has diminished. In Elizabethtown and We Bought a Zoo, he sentimentalized surprisingly hollow storylines with no discernible purpose but to get you misty-eyed and gooey-hearted. With the utterly unexceptional Aloha, this humanist filmmaker so misses the mark you might conclude he’s simply lost his mojo. Focused on an ethically challenged private defense contractor (Cooper) who returns to the Big Island to smooth the way for a suspicious satellite launch and to tangle and untangle two romantic interests (Stone and McAdams) along the way, the movie is little more than a series of pseudo-lyrical moments strung together at the expense of a coherently plotted path. To paraphrase the ever-vocal wide receiver Rod Tidwell in Crowe’s most successful film, “Show us the story, Cameron!”

The basic narrative problem here is that there’s more backstory than story. Cooper’s supposedly deeply flawed wheeler-dealer comes off more like a bland frat boy with a Coppertone tan, with more credence given to his impossibly handsome appearance rather than the shady past that drives Crowe’s screenplay. Other actors in the film are required to say things like “One more thing, Mr. Three-Day-Beard-Boy” and “Take those blue eyes and go to her” in conversations with him so glibly framed it’s a wonder they can deliver their lines with any sincerity. And in those conversations in which words are not spoken but intuited (highlighted by an ill-conceived subtitled exchange between two romantic rivals that would be an embarrassment for any filmmaker), the locked gazes and lingering glances say more about the actor’s eye color than anything. The entire movie has a creepy aura of self-consciousness. In addition to the aforementioned definitions of aloha, the word also doubles as a coming-and-going greeting in the Hawaiian vernacular. Here, it regrettably signifies the possible goodbye to a once-promising career of a filmmaker who had us at hello. 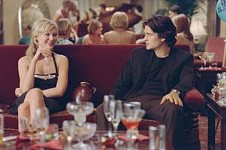 Elizabethtown
Cameron Crowe's romantic comedy doesn't make the attraction between the characters played by Kirsten Dunst and Orlando Bloom believable and then goes off in dozens more unprofitable directions.