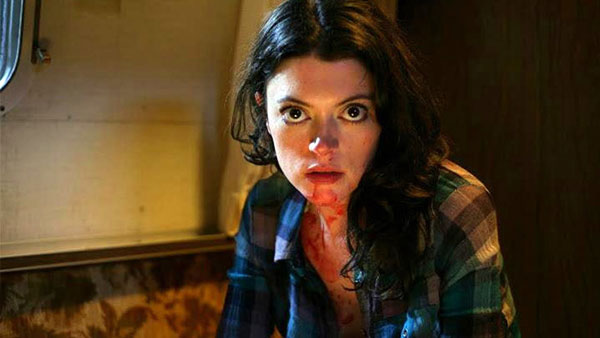 A modernized riff on Irish author Sheridan Le Fanu’s 1871 novella Carmilla, Wood’s film transplants the bare bones of the plot to rural Atlanta, making this the first Southern Gothic retelling of the story which, likely, was the Victorian-era tale that most influenced Bram Stoker’s writing of Dracula, and all that followed. It makes for an interesting, but ultimately tedious, slow-burn of a movie that, while abundant in atmosphere and kudzu, fails to support its bloody climax and does a bowhunting William Katt no great favors.

Searching for her mother, the sturdy-looking Carmilla (Orr) arrives by bus at mom’s last known address, a backwater manse owned by wild-maned Troy (Katt) and his daughter Laura (wild-eyed gamine Fierman, late of V/H/S). Troy professes that he knows nothing of Carmilla’s family, but Laura soon confesses otherwise, setting off a chain of events that’s foreshadowed by all manner of moody insert shots, including a deadly-looking kitchen knife early on. As Carmilla digs for the truth, it becomes apparent that the family has plenty to hide (or not, in the case of Laura’s almost instantaneous erotic attraction to her new friend). Not only is this house not a home, it may well be a trap.

Carmilla wasn’t the first tale of vampirism to come out of the British Isles in the Victorian era, but its femme-centric viewpoint can be viewed as the basis for dozens of films portraying female bloodsuckers as objects of the male gaze and symbols of the fear of emasculation. Le Fanu influenced Stoker’s Dracula, to be sure, but also served as inspiration for Carl Theodor Dreyer’s 1932 masterwork of dread, Vampyr, and later the eerie blood-and-roses erotic horror of Jean Rollin and Jess Franco. Everything from the latter’s Vampyros Lesbos to Hammer Studios’ The Vampire Lovers has dipped its tongue into Le Fanu’s original text, mining it for its no-longer-taboo mix of lesbianism, bloodlust, and kink.

Alas, The Unwanted isn’t quite kinky or horrific enough to attract either the male or female gaze for much of its running time. Orr turns in a smart, tough performance that’s undercut by the crazies around her, although the quiet sense of Southern dread that director Wood and his cinematographer Chris Tsambis manage to mount is impressive. Possibly, I’ve become jaded after too many previous film invocations of Le Fanu’s seminal vamp – it’s hard to top Jess Franco, after all – but this cutter-meets-cuter reworking left me cold and dead inside.