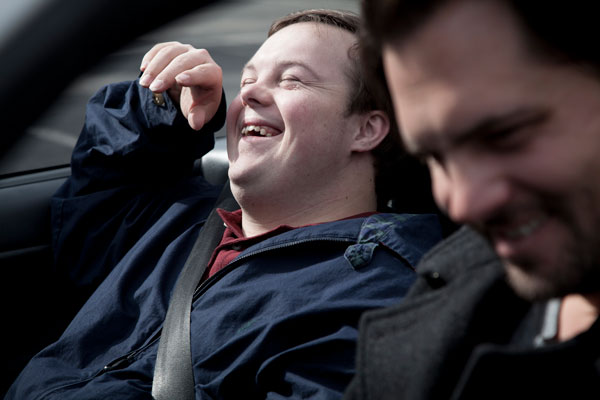 A tale of redemption through an unlikely friendship, Where Hope Grows is another entry in the ever burgeoning genre of faith-based films. Chris Dowling’s second feature at first seems anodyne enough, but once the plot mechanics kick into high gear, the film becomes as unsurprising as a prix fixe menu.

Calvin (Polaha) is an ex-baseball player, dropped from the Detroit Tigers for a paralyzing panic attack at home plate. Currently, he spends his days drinking at the neighborhood bar with his buddies Milt (Zabka) and Frankie (Powell), and decidedly not having anything to do with raising his teenage daughter, Katie (Miller). That behavior has apparently driven her to be consoled by Colt (Grant), a cartoonishly aggressive boyfriend who, when trying to take Katie’s virginity, offers up the seductive line, “Do you know how many girls would get with me right now?” Well played, Colt. Anyway, Calvin, in his daily ritual of picking up bottles of bourbon from the local grocery store, strikes up a friendship with Produce (DeSanctis), a young man with Down syndrome whose love of his job has reforged his very name. The two develop a relationship, wherein Produce’s love of life, fruits and vegetables, and the tenets of Christianity melt the stone that was once the heart and soul of Calvin. Eventually, Calvin trades in the bottle for Jesus (and AA), and with the help of potential future soulmate Amy (Burns), it appears that things are looking up.

There’s a moment in the third act when the inevitable tragedy strikes, that I thought the film might transgress the boundaries of its genre, but perhaps I was expecting too much. Where Hope Grows ends up being a couple of notches above a Hallmark film in which all the pieces of the puzzle fit in a perfectly contrived way that saves some sinners, lets a few fall to the devil, and leaves the viewer in utter awe of how mediocre a film can be.