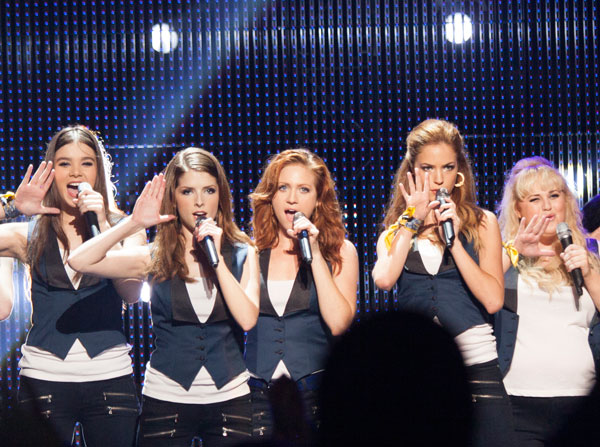 This generation’s heir apparent to the likes of Bring It On and Dodgeball, 2012’s Pitch Perfect proved to be an improbable delight: a familiar underdog story set in the world of competitive collegiate a cappella, populated almost entirely with scene-stealers, fueled by a wonderfully irreverent sense of humor, and gilded with a soundtrack of toe-tapping pop music mash-ups. Efforts were inevitably made to rebottle that lightning, and the resulting Pitch Perfect 2 mostly succeeds in spite of the apparent strain to serve the agendas of both its loyal audience and its fledgling stars.

We join three-time defending national champs, the Barden Bellas, as they perform for President Obama and the First Lady at the Kennedy Center, only to suffer from a southernmost clothing malfunction in full view of the world. Disqualified from competing at a national level, Beca (Kendrick), Fat Amy (Wilson), Chloe (Snow), and the others negotiate their reinstatement on one condition: that they win the World Cup of a cappella against the ferocious lockstep of Germany’s Das Sound Machine.

Beyond the inciting incident, the actual threat of hardcore a-ca competition vanishes far into the horizon, a north star toward which several sketch-length detours are half-heartedly aimed. Watch as the soon-to-graduate Bellas manage to incorporate a new freshman member (Steinfeld) and commence with a pillow fight! Thrill as the girls go on a camping retreat to restore their harmony! Question as Beca keeps a record-company internship secret from her best buds for the sake of arbitrary second-act conflict!

While reprising her roles as both producer and color commentator Gail, Elizabeth Banks has stepped behind the camera for her directorial debut, displaying a bit more verve during the musical performances than the original’s Jason Moore had. Returning screenwriter Kay Cannon keeps the one-liners coming while also burdened with giving separate-but-equal screen time to leading ladies Kendrick, Wilson, and Steinfeld. (Remember when Anchorman second banana Steve Carell had to have his own romantic subplot in the sequel? It feels a lot like that.)

The narrative stalling tactics do tire as they accumulate, but the chuckles come often enough, with the hilarity peaking during a sublimely silly mid-movie riff-off to rival the first film’s drained-pool showdown. Naturally, the whole shebang ends with another ready-made chart-topper to follow in the infectious tradition of Kendrick’s “Cups (When I’m Gone),” but until then, Banks and friends are tasked with uneasily juggling good fun and bad taste. For instance, the group’s new token Latina exists almost exclusively to make Yakov Smirnoff-grade jokes about how much worse things were in her homeland of Guatemala.

Thankfully, characters like the proudly brash Fat Amy endure, and even Kendrick’s Beca has traded in her pouty-loner routine for something a bit dorkier. Anyone already enamored of this gang of girls won’t leave Pitch Perfect 2 any less fond of them; they just may quote it a little less often and not spin its soundtrack as much. In that sense, it’s really this generation’s Wayne’s World 2. 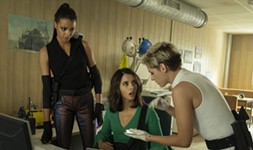