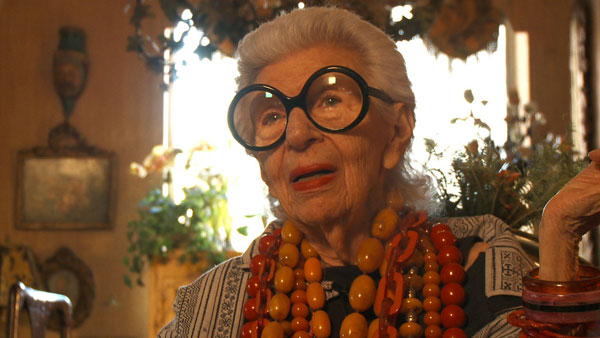 Iris Apfel doesn’t require a camera crew to move her from the private to public historical ledger; she’s already a semi-deified figure in fashion and design circles. But even if she’s chiseled out her name, it must be nice to have another monument there to capture the moment. And Iris – one of the last films from Albert Maysles, a pioneer of direct cinema who passed away in March – is all about the moment.

Iris – or, more formally, Mrs. Apfel, although the film’s chummy shorthand is catching – is a real character. Clacking around in her stacked bangles, she’s not quite as flamboyant or fringe as Little Edie Bouvier Beale, whom Maysles and his brother David (who died in 1987) made immortal in their 1975 documentary Grey Gardens, but the mind can’t help but drift, imagining Iris’ pleasure in a fellow fashion outlaw. In 1950, Iris started a textile firm with her devoted husband, Carl, inspired by Old World fabrics and techniques, which grew into a lucrative interior design business and restoration projects with multiple White House administrations. She traveled the world on buying trips, filled closets in multiple boroughs and states with designer duds, and amassed a costume jewelry collection impressive enough to turn the head of the Metropolitan Museum of Art’s Costume Institute, which mounted a show around her in 2005. The cult of Iris caught like grassfire, and the film catches this nonagenarian nonpareil, ever in her defining owl glasses and heavy jewelry, at peak heat.

A quick-hit biography is not so immediately gleaned from the film: It takes a while for the unschooled viewer to get what’s so special about this kooky lady who wears denim embroidered with Mickey and Minnie Mouse. (Sincerely? Irony doesn’t seem like Iris’ bead, but I couldn’t say for sure.) Indeed, in an Internet age wherein pretty much anyone and everyone has a social media profile for a pulpit or even a reality series devoted to their specialness – we have an excess of “characters” now – the cynic may wonder why Iris warrants her own film. If Maysles’ intention was to pay tribute to Apfel’s singular career, then Iris waits too long to establish her bona fides. But nothing in Maysles’ filmography suggests an interest in anything so basic as a biographical documentary, so impatient viewers are encouraged to chill and enjoy the perfect spectacle of Iris and Carl strolling a flea market and trying on hats.

There are plenty of interviewees on hand, from photographer Bruce Weber to J. Crew Creative Director Jenna Lyons, who wax rhapsodic about Iris’ inimitable style, but it’s Iris’ own appraisal – she was never going to be a pretty girl, and that’s okay, because pretty is boring – that becomes the film’s raison d’être, in a way. Pretty is boring, and youth is wasted on the young. In its portrait of stylish waywardness, Iris is a potent argument against fast fashion, fast anything. And as a quiet cataloging of a couple slowing down and accessorized with wheelchairs, walking sticks, and hands tightly clasped, it becomes a poignant snatch of real-time aging: caught by a filmmaker in his twilight, familiar enough to be addressed attentively by his subject, who wonders if he’d like a cup of tea, too. It’s a moment to be savored. 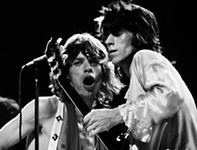 Gimme Shelter
This film, which captures that awful moment at Altamont, is a documentary that seemingly captures the very moment when the peace-and-love generation lost its naivete and innocence. 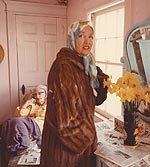 The Beales of Grey Gardens
...