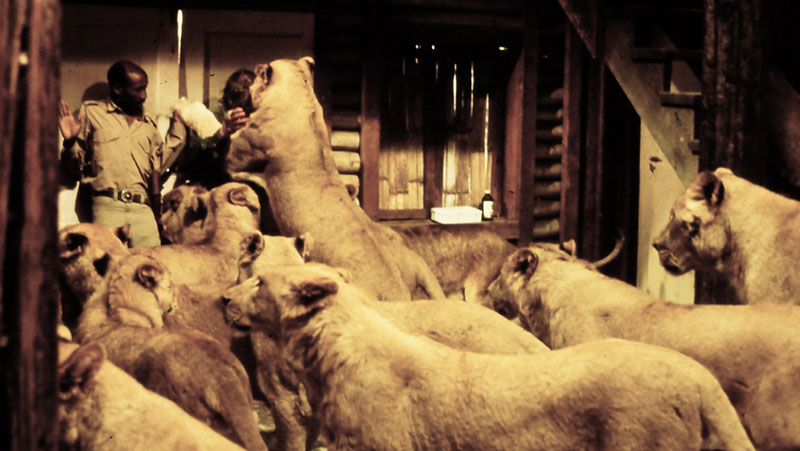 With fangs bared and claws extended, the must-be-seen-to-be-believed 1981 film Roar plays like a trippy episode of Wild Kingdom gone wrong, a nerve-racking experience fraught with the possibility of a casual mauling or deadly pounce from start to finish. It may be one of the most fucked-up movies you’ll ever see. Eleven years in the making and at a staggering cost of $17 million – the food bill for animal carcasses was enormous, no doubt – this incoherent piece of crazy about a lunatic (Marshall, who also directed, produced, and co-wrote the film) living side-by-side with a hundred-plus, semi-domesticated but nevertheless untrained big cats in the African countryside (“I have to get as close to them as possible”) is destined to become a bad movie we love. It’s a madhouse. Lions and tigers … and leopards and cheetahs and panthers, oh my!

The negligible plot has two storylines, loosely speaking: the reunion of nutjob Hank and his visiting estranged family (played by Marshall’s then real-life family: his wife, Hedren, her daughter, Griffith, and his two sons by another marriage), and the revenge of some pissed-off white locals who want to eradicate Hank’s pride and joy. The film is a Screen Actors Guild nightmare. The performers don’t so much act in the film as they survive it. Most of the time, the cast is avoiding a lion, hiding from a lion, running from a lion, getting knocked down by a lion, or praying not to be eaten alive by a lion. You rarely see their distressed faces, which are usually downcast or sideways as they fend off the clumsy (or is it hungry?) advances of their overgrown house cat castmates. Strangely, the scenes in which Hank’s family members are terrorized upon their arrival at his home are played almost comically. In one scene, a prostrate and helpless Griffith lies amidst the shambles of the house with a huge lioness atop her, the creature’s jaws nearly framing her face. To the actress’ credit, she appears calm, which is either a testament to her acting craft or her resignation to fate. (Or, perhaps, a bottle of tequila.) The incident required 50 stitches and some cosmetic plastic surgery. Other actors in the film suffered much, much worse injuries. The blood on Marshall’s hands in Roar is both literal and figurative.

On its merits, the film is abysmal, any way you look at it. Still, you can’t take your eyes off it (between wincing), at least not until its Kumbaya coda of familial and feline serenity. Even then, the earnest lyrics of the folksy song about finding Eden that accompanies this montage are worth the wait. (“Hey, isn’t it time?”) Roar is a freaky taste of danger that no one in his right mind would ever attempt to undertake again. Kudos to Drafthouse Films for re-releasing this flabbergasting oddity, plucking it from the obscurity to which it’s been relegated for over three decades. Something this bad can’t help but be good.