Alex Garland has an inspired mind for the beginning and middle of end-times. A novelist turned screenwriter and now director, he’s consistently mined the premise of a collapse – of infrastructure, the social contract, a moral compass – in films like The Beach, 28 Days Later, and Sunshine. But his third acts get all hinky: It’s not just the plot that goes nutso near the end; it’s his control of the narrative, too. Garland’s directorial debut, Ex Machina, catches the same high fever around its climax, but what comes before is a cold-sweated chamber piece about human error and techno-terror.

At an Internet megacorporation, a low-level programmer named Caleb (Gleeson) wins a companywide lottery to spend a week with reclusive CEO Nathan (Isaac). It’s the proverbial golden ticket, only Wonka lives in an ultramodern, maximum-security, scarily isolated Alaskan compound, like a Dwell magazine center spread stealing looks from Alcatraz and the Overlook Hotel. Bulked up and wild-man bearded, Nathan is friendly, from a remove; he says “dude” a lot, but with the incontestable authority of an alpha. Nathan soon reveals the true purpose of Caleb’s visit: In a variation of the Turing test, Caleb will be the first outsider to interact with Ava (Vikander), a human-scaled and -shaped artificial intelligence built by Nathan. Caleb has been brought in to test Ava’s “human” qualities, but Garland elegantly expands the inquiry to question Nathan’s humanity as well.

The film takes Caleb’s POV, and that’s too bad – he’s the least interesting arm in a three-hander you might as well subtitle “Two Arresting Characters and That Other Guy.” (Analytical but susceptible, Caleb’s been rolled over so many times you can almost see the tire marks, and Gleeson’s played a naif so often it’s now just diminishing returns.) Isaac owns the movie by way of brute force. He’s playing a brainiac at ease with both Ludwig Wittgenstein and the Bhagavad Gita, but it’s Isaac’s physicality, the way this muscled megalomaniac moves through the world, that’s most breath-catching. He’s like a slab of meat injected with the juice of Steve Jobs, Howard Hughes, and Colonel Kurtz.

And what of Ava? As conjured by Vikander and a seamless CGI, she’s a sharp-witted and sympathetic modern miracle of mesh and gears and girl-like parts, locked in a war with Nathan, her maker. In the film’s most intimate moment, Caleb watches the machine peel off her girlish dressing. We know it’s not just a costume for her, because later he watches her survey a cabinet of naked female parts, considering which one to wear. The emphasis is on him watching her – an act in which the audience is complicit – which makes the exclusively female flesh parade all the more discomfiting. We don’t know enough of Ava to understand the choices she’s weighing – blond or brunet, buxom or flat-chested. Garland has made her a cipher for the sake of suspense, which makes dramatic sense but doesn’t get us any closer to understanding precisely why his Pinocchio is so hungry to become human.

Garland’s film is no timid nibble of the ethics behind building sentient robots; it’s alert to the urgency of this very plausible future technology, and wickedly creepy, too. But his conclusions don’t feel 100% chewed through. A rattling and ruminative piece of speculative fiction, Ex Machina is good enough to wish it were even better. The Fembot Gambit
Consciousness and anti-bromance in Ex Machina 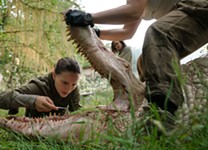