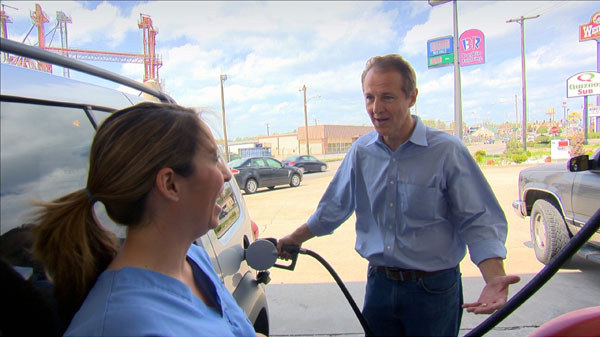 Revealing little new about the political lobbyists that Thank You for Smoking slyly skewered a decade ago, Merchants of Doubt adopts a similarly glossy visual persona, playing up motifs of card games and con artists as director Robert Kenner (Food, Inc.) identifies and dismantles the recurring representatives and tactics used to spin the agendas of Big Tobacco, Big Pharma, and Big Oil in Congressional hearings and the media over the course of several years.

Based on Naomi Oreskes and Erik M. Conway’s book of the same name, Kenner’s documentary makes clear the proven value of supposed experts casting significant doubt on seemingly incontrovertible evidence in the public eye, a strategy epitomized by tobacco companies successfully diverting the blame from a need for self-extinguishing cigarettes to a need for less flammable furniture, the chemicals for which resulted in a slew of subsequent health problems.

The film is most damning when pointing out well-paid figureheads and their preferred methods of obfuscation, such as the doctor who successfully appealed to politicians on an emotional level by claiming on three separate occasions to have treated three severely burned babies – never once while under oath. Petitions signed with thousands of phony names bolster counterarguments all the same, and think-tank mouthpieces are given equal weight on cable news segments by virtue of shouting down the easy-to-ignore jargon of well-meaning scientists.

Despite an effort to establish how such concerns have and should transcend partisan thinking, Kenner largely preaches to the left-leaning choir with plenty of hissable sound bites and a generally glib tone that undercuts an otherwise understandable sense of righteous indignation. (It’s the kind of doc that unloads a number of Twilight Zone clips to get an easy laugh the moment a talking head references its topsy-turvy worldview.)

Worse yet, Merchants spends much of its running time exposing trends of political subterfuge before working in an earnest call to action regarding climate change. Using the same type of tinkling score and shots of children at play as campaign ads shown earlier in the film, this late-inning agenda comes off as noble as it is hypocritical. Regardless of one’s personal beliefs, it’s tough to respect a movie that ultimately invites viewers to question every case of propaganda except its own.