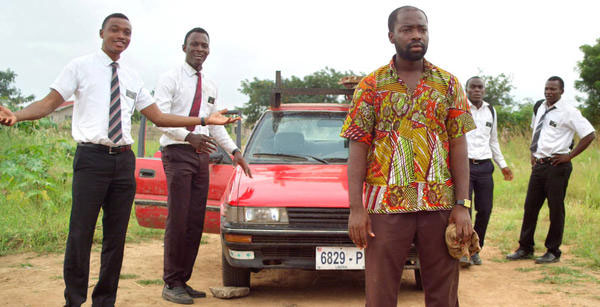 Faith-based filmmaking has had a hell of a time when it comes to putting nonbelievers in seats. Try though they might, Christian filmmakers have yet to sway the critical and popular perception that God – any god, pick your favorite! – belongs in a house of worship and not on the cineplex screen, that favorite of idolators everywhere. Heaven Is for Real, God’s Not Dead, and The Book of Mormon Movie, Volume 1: The Journey end up being too preachy or too poorly made, or just plain wander off into the narrative wilderness for what feels like 40 years. This isn’t the case, thank God, with Freetown, the second feature from Mormon director Batty (The Saratov Approach). The film is based on the “true story” of six LDS missionaries unlucky enough to be preaching the gospel in Monrovia, Liberia, just as civil war breaks out in 1989.

Native Liberians all, they’re caught between armed rebels backed by future Liberian president and current crimes-against-humanity convict Charles Taylor and then-President Samuel Doe’s government forces. As Monrovia, the capital, collapses around them, they decide to attempt a daring escape to neighboring Sierra Leone’s Freetown. The hitch? It’s 370 miles away, their jerry-rigged car only has five gallons of petrol in it, and, to top it off, local militia leader Ansa (Myers) has it out for one of them, Elder John Gaye (Michael), a member of the hated Krahn tribe.

With barely enough food and water, much less gasoline, these fervent young elders, along with church counselor and driver Abubakar (an extremely winning Adofo), strike out on their own, only to be stymied by endless roadblocks manned by AK-47-toting thugs, mechanical foul-ups, and godawful, mud-and-pothole-riven roadways.

The Mormon faith is never played down for the sake of lay audiences in this unusually gripping story. There’s even comedy, of a sort, when one elder literally bores his way through yet another trigger-tense roadblock by proselytizing: “If you receive his gospel and repent, you will be happy. I’d love to share more with your friends!” he hollers as the elders are hastily waved through to the chagrin of the rebel gatekeeper. Divine providence, indeed.

Given the Mormon church’s notorious history when it comes to people of color, interracial marriage, and, while we’re at it, their recently updated views on LGBT and gender equality issues, skeptics might wonder if this is all a very pricey PR gimmick. Probably not. Cinematographer Jeremy Prusso catches some stunning imagery, Robert Allen Elliott’s score is genuinely stirring, and the cast, most of whom are from Monrovia, is uniformly excellent. That said, anyone familiar with 1990s-era West African history will realize that these six missionaries have escaped the Liberian civil war only to (one assumes) become swept up Sierra Leone’s own horrific fragmentation a year later. Oh, God. 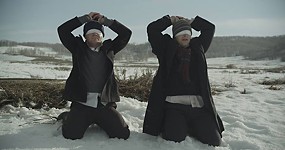 The Saratov Approach
This faith-based, true-life thriller tells the story of two Mormon missionaries who were kidnapped and held for ransom while serving in Russia in 1998.