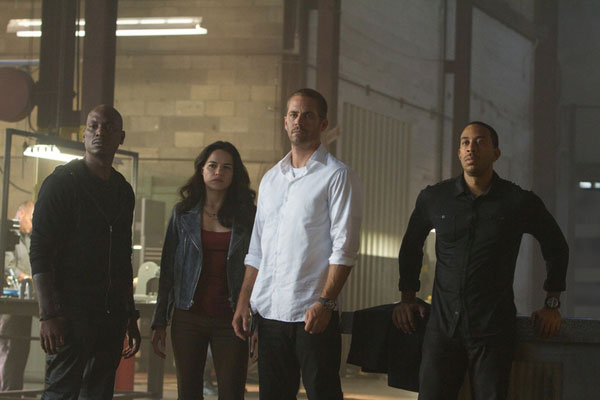 Who would have thought in 2001 that an exploitation movie about hot rides, hotter women, and an undercover cop who infiltrates L.A.’s underground racing scene would become the most durable auto-mayhem franchise since Manny, Moe, and Jack? At the time, I dubbed it a cult movie and pretty much dug the crazy shebang. Jacking the title from producer Roger Corman’s unremarkable 1955 noir, original director Rob Cohen’s origin story pitted the grease-monkey melodramatics of gravelly gearhead Dominic Toretto (a then barely known Diesel) and his “family” against the equally motor-mad but overly white-bread FBI agent Brian O’Conner (Walker), who eventually sides with Toretto’s tribe and lives to fight another day/decade. The late Paul Walker’s macabre, high-speed death in late 2013 effectively put Furious 7 on indefinite hold, until now. After seven films, the chronology is getting hazy; didn’t Tokyo drifter and Dominic’s pal Han die in Fast & Furious 6? Yeah, well, apparently the events of Furious 7 take place before that character’s explosive demise. Or maybe it’s a continuity error. I doubt that though, and frankly, it doesn’t matter: Furious 7 delivers everything fans of the series could possibly desire and then doubles down and down again. It has enough high-octane mixture of four-wheeled fury, never-say-die bromance, family-first proselytizing, and enough practical, non-CGI stuntwork – both human and automotive – to make even George “Mad Max” Miller’s palms go all sweaty. Furious 7 is, to put it succinctly, a rush and a half.

How much of that is due to incoming director James Wan, who, with fellow Aussie Leigh Whannell, brought us the Saw and Insidious films, is open to debate, although being Australian (and all that that cinematically implies), Wan presumably has high-test blood in his veins and drools antifreeze. It’s about time he honored his rubber-burning, ultraviolent Ozploitation roots, and he does so here with a gloriously nonstop barrage of vehicular carnage and wildly imaginative car gags. (Chris Morgan penned the last four entries in the series and even his dopey, Vin-Diesel-y dialogue is better than usual.)

A plot? Why bother? This the like the Stunt Rock of smash-’em-ups. To be fair though, Dom and his “family” are being hunted by former black-ops psychopath Deckard Shaw (Statham, at his most Statham-esque), the vengeful brother of the previous film’s villain. There’s a techie MacGuffin dubbed “God’s Eye” because it can command and control all the CCTV/traffic cams/iWhatevers on the planet. Shaw wants it to find Toretto, and vice versa. Kurt Russell has a choice role playing a twist on Lee Van Cleef in Escape From New York to Diesel’s Snake Plissken. Michelle Rodriguez continues to kick all kinds of ass and look dazzling doing so, and the cars, oh my gosh, those poor cars. Dom’s ’70 Dodge Charger returns, as well as the ’70 Plymouth Barracuda from Furious 6; a Bugatti Veyron, an Aston Martin D89, and a Maserati Ghibli also suck screen time away from the actors, who, by now, are a well-oiled – synthetic only, please – and complementary crew with only a few new faces.

Although it’s too long by a good 30 minutes, watching Furious 7 (8 is on the way) is about as much fun as you can legally, safely, and sanely have without crashing your own Lykan Hypersport through Abu Dhabi’s famed Etihad Towers complex. Rev ’em up and go.