Something is coming for us. It is inevitable, be it disease, disaster, or disillusionment (believe me, that can be a killer). It Follows sets up a narrative in which an unstoppable force, in this case an entity that can take any human form, inexorably tracks its victims through sexual intercourse. Once this entity gets you, you’re through, as is potentially everyone back through the chain of liaisons. Your only recourse is to pass the curse to someone else, and hope they do the same. It’s a clever hook on an old saw, one that writer/director David Robert Mitchell (The Myth of the American Sleepover) subverts further by making survival dependent on having more sex, instead of being punished for having it at all.

After a prologue in which we see the gruesome effects of this curse, we meet Jay (Monroe), your average teenage girl living in the suburbs of Detroit. She and her sister Kelly (Sepe), and their small group of friends are whiling away the summer watching old monster movies and playing card games. Jay has a date, though, with new boyfriend Hugh (Weary) that ends first in the backseat of a car, and then with Jay duct-taped to a wheelchair in a dilapidated parking garage while Hugh frantically explains that he just gave her the worst STD imaginable. She returns home freaked out, and soon enough is benignly stalked (it is called It Follows, not It Chases). Convincing her sister and friends that she is in mortal danger, they try to help her track down the source and stop the monster.

Mitchell mixes the mood of early David Cronenberg with the brilliant mise-en-scène that John Carpenter utilized so well in his late-Seventies output. It Follows has style to burn, and the cinematography, coupled with a nuanced, synth-heavy soundtrack keeps ratcheting up the tension in smart and creative ways. It may wear its influences on its sleeve, but It Follows eclipses mere cinematic pastiche to create something creepy and evocative. It is filled with unsettling imagery and a paranoiac atmosphere, and has a wicked slant on the horror genre’s obsession with burgeoning sexuality. You’re not likely to shake it anytime soon.

An abbreviated version of this review ran as part of the Chronicle’s Fantastic Fest coverage. 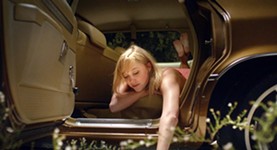 Fantastic Fest 2014: It Follows
Sexually transmitted horror gets an update in this mesmerizing film

Under the Silver Lake
...