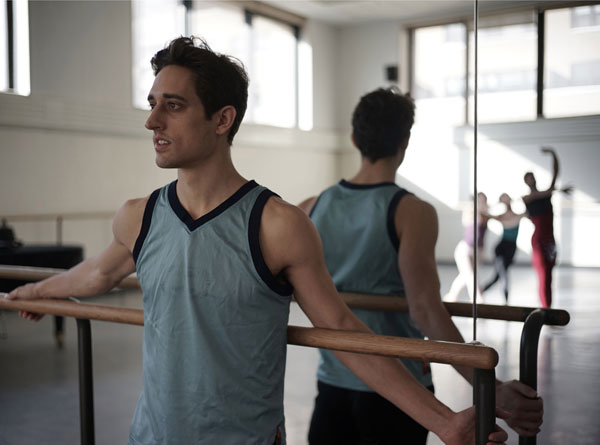 In the gorgeous, glorious 2010 performance film NY Export: Opus Jazz, co-directed and shot by Jody Lee Lipes, just as considered as Jerome Robbins’ dance choreography were Lipes’ camera movements, be they elegantly gliding, laying low to close-up on footwork, or spiriting high for a bird’s-eye big picture. With the documentary Ballet 422, Lipes’ first return to dance after notable narrative cinematography work (on TV’s Girls and the upcoming Trainwreck, among other projects), he’s somewhat boxed himself into a corner with the cinema verité directive to capture the moment and keep out of the way.

Certainly it’s an interesting moment as 25-year-old dancer Justin Peck, then a member of the corps de ballet (meaning, low man on the career ladder), is tapped to choreograph an original ballet – the 422nd for the New York City Ballet, the company made famous by George Balanchine and Robbins. Lipes’ camera trails Peck from rehearsals to costume fittings to lighting-design meetings as he readies his ballet over a breakneck two months’ time. The film does a good job of glancing at the many cogs in the wheel that industriously spin to put on a major production, although comparisons to Frederick Wiseman’s more expansive, more probing La Danse: The Paris Opera Ballet are inevitable.

The thing about fly-on-the-wall filmmaking (which crucially includes the editing) is that while the “boring” stuff can be revelatory, it can also be, well, if not boring, then simply ordinary. If the running time were longer – it’s dancer-trim, presumably for a future PBS broadcast – the minutes spent shadowing Peck on the street or chronicling him blow-dry his hair pre-performance probably wouldn’t read as empty minutes. But Peck is not a demonstrative person, and the assembled footage of him feels not just physically but emotionally removed.

Still, anyone with a zest for dance will find plenty of interest here. And Lipes is not without intention. Teeth may be gnashed when he skates past the opening-night performance, but his point – as well as his empathy and allegiance with the artist/creator – is perfectly articulated: It’s not about opening night, it’s about the sweat that gets you there.