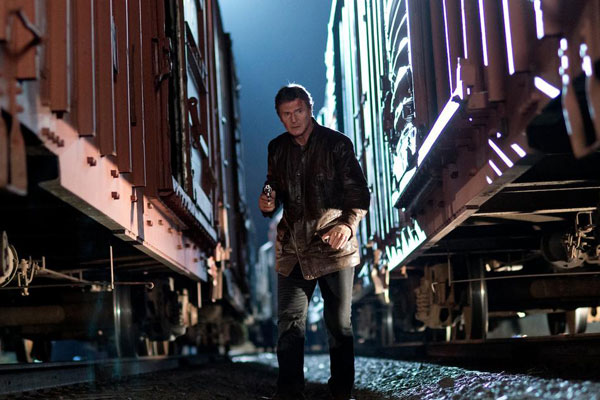 Prone as the film industry is to cycles of success and stagnation, it hardly surprises that the mere novelty of Liam Neeson, action star, has all but exhausted itself in the six years since the original Taken hit in a big way. With each diminishing sequel has come a handful of superior genre efforts unfairly contaminated by that same sense of staleness, among them an informal trilogy of pulpy collaborations between the hulking Irishman and director Jaume Collet-Serra: Unknown, Non-Stop, and their latest, Run All Night.

The closest thing to a common thread between these films is Collet-Serra's predilection for casting Neeson as more of a sad bastard than a superhero. In this case, he plays Jimmy Conlon, a washed-up hitman and neglectful father whose quick draw saves the life of his estranged son Mike (Kinnaman), but puts them both in the crosshairs of longtime criminal compatriot Shawn Maguire (Harris), a New York kingpin with no shortage of dirty cops and deadly assassins at his disposal.

A fairly straightforward chase thriller ensues, with Brad Ingelsby's script finding plenty of fatherly sins from Jimmy's past to fall on his son's unwitting shoulders. Screen vets Neeson and Harris bring equal weight to their regret-strewn exchanges, and Collet-Serra's usual directorial flair is relatively reined in, save for borough-hopping transitions between scenes. Given its endearingly dingy depiction of present-day NYC, the film often calls to mind the stripped-down machismo of Walter Hill's earlier films, full of growling men (an uncredited Nick Nolte included) and growing menace.

The result is a well-cooked serving of meat-and-potatoes action filmmaking, but its main failing is an ultimate inability to distinguish itself by more than minor flourishes. However, in a year in which Taken 3 already struggled to clear a low bar for Neeson-led asskickery, Night puts up a relatively good fight.