It begins with disbelief, then builds to annoyed tolerance. When the bullies and thugs infiltrate and take over an area, residents tend to view the usurpers’ doctrinaire fanaticism as the utterances of zealous buffoons. When the proscriptions and use of force grows, the population flees or self-censors their contradictory beliefs and actions until the farce becomes the only reality and all opposition goes underground. Whether it’s Nazis, jihadists, or fundamentalists of some other stripe, history shows us that passive incredulity is the first step toward enslavement. First they come for your neighbor, then they come for you.

Sissako, the noted West African filmmaker (Bamako, Life on Earth), has delivered a penetrating yet humanist portrait of the jihadist takeover of Mali in 2012. The film is at once specific and timely, while also reflective and universal. Opening with the sound of gunfire and the sight of cultural antiquities and pagan statuary being blown to bits by young jihadists, Timbuktu could not have a more opportune moment for release as viewers around the world watch videos of jihadists committing similar acts in present-day Iraq. The title Timbuktu also conjures meanings both specific and metaphorical: It is a specific city in Mali with a long history, but also a word used colloquially to express a sense of the faraway (as in “from here to Timbuktu”). Sissako’s film speaks to his homelanders, victims of jihad everywhere, and citizens of the world who bear witness to the sting of persecutory dogma. Timbuktu, an Oscar nominee for Best Foreign Language Film, is a remarkable work, and one of the rare African films to find a U.S. distributor.

A man, his wife, and their 12-year-old daughter, who is the apple of her father’s eye, live in a desert tent on the outskirts of Timbuktu. The man’s herd of cattle is tended to by a prepubescent shepherd, and his life appears comfortable as he relaxes by making music and drinking tea with his beloved family. A mélange of languages are spoken in the area, as befits a former trading post. The aforementioned jihadists bluster into town, issuing proscriptions (through interpreters) against smoking, soccer, and all music, and ordering women to wear gloves and socks in the market. A fishmonger defiantly insists she can’t manage her merchandise with gloves on; a man in the street completely removes his pants when he’s unable to roll them up to the ordered length. At the mosque, the imam asks the unyielding, uncompassionate jihadists, “Where is God in all this?” The chief jihadist chastises a woman for washing her hair in front of him, when it is he who has appeared at her home unannounced; later we see him slip behind a sand dune to smoke a cigarette, unable to obey his own edicts.

The farce grows more ominous with each repression imposed by the outsiders. Focus moves from the family in the desert to some of the other town occupants, and before long, sharia law is imposed on the citizens. Infractions become justifications for cruel death sentences. Timbuktu, nevertheless, observes the situation with exculpatory eyes; the film is a magnificent document of secular humanism. 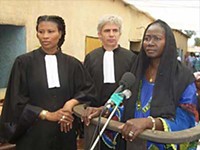 Bamako
This Malian courtroom drama is like nothing you've ever seen: The people put the institutions of the World Bank and the International Monetary Fund on trial.