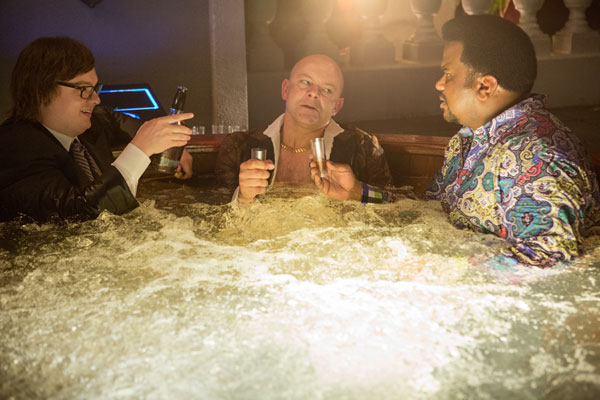 Oh, for a time machine that would give me back the hour and a half I spent watching this movie. An unfunny raunchfest, Hot Tub Time Machine 2 shows that whether visiting the past or the future, penis jokes are always good for guffaws and indifferent filmmaking technique is guaranteed a pass. (And to be honest, I’m making a supposition about those guffaws because I was the only audience member at the matinee screening I attended. Maybe what this sequel truly illustrates is that it really is possible to underestimate the popular taste of the American moviegoer.)

As a result of the first movie when our trio of characters traveled back through time due to a malfunctioning hot tub, excessive inebriation, and a secret ingredient, they have become successful men in the present by leveraging their unique knowledge. Lou Dorchen (Corddry) has become rich as the founder of a search engine called Lougle, and Nick Webber (Robinson) has become a successful songwriter who turns out hits based on partially remembered songs he heard during his travels. Returning for another ride is Lou’s beset-upon son Jacob (Duke), but John Cusack ducked out on a repeat performance as the time-travelers’ compadre, so Adam Scott takes on the role of that character’s son. Lou, Nick, and Jacob hurl themselves into the future to find the culprit when Lou is shot in the penis during one of his bacchanalian parties.

Choppy, tangentially related scenes follow upon one another, dragged further down by witless dialogue and nasty behavior. Lou is an absolute asshole and a prolonged sequence that has the characters engage in virtual gay sex for a reality show of the future flies the gay-fear flag for far too long. The only good news in Hot Tub Time Machine 2 is that in 2025, Jessica Williams is hosting The Daily Show on Comedy Central. 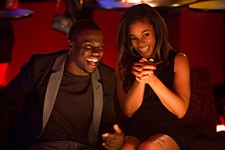 About Last Night
Sexual perversity is released with gleeful abandon in this second film outing for Mamet's 40-year-old play. 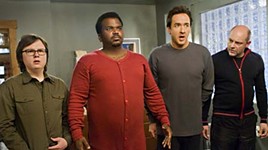 Hot Tub Time Machine
Consider this comedy yet another nail in the Eighties coffin.