This Spanish-language, Mexican/German co-production (aka Buen día, Ramón and Guten Tag, Ramón), which was a box-office sensation in Mexico in 2014, migrated north this month for a theatrical launch in the U.S. Grounded in reality yet packed with a generosity of spirit, Good Day, Ramón appeals to our better natures and generates overall good will with its plausible but improbable story.

Ramón (Ferrer), a Mexican teen thrust into manhood, wants to do right by his impoverished and ailing mother (Ramírez) and grandmother (Barraza). But after five unsuccessful attempts to cross over into the U.S. to find work, he tries another tack. He decides to immigrate to Germany on the advice of a friend who has an aunt in Wiesbaden who has promised to help Ramón relocate. Once there (following a delightful sequence that traces Ramón’s step-by-step international travels), he discovers that the aunt has mysteriously vanished from the address he’s been given. The mystery looms even larger due to his inability to speak or understand German. Penniless (or is that euroless?) and communicating only through pantomime, Ramón crashes in the bus station and begs for coins on the street. There he encounters kindly Ruth (Schöner), when he helps her carry her groceries home to her apartment in a building occupied by pensioners. Before long, she’s giving him one of her old winter coats and a place to reside in the basement storage room of the building. Months pass and, even though neither seems to have learned a word of the other’s language, they have developed a warm relationship. Ramón earns money taking out the garbage for the other residents and teaching them salsa dancing. Except for one ornery retiree who reports Ramón to the immigration authorities, everything in the young man’s life is copacetic.

Being forced to rely on the kindness of strangers and having it actually work out sounds like an apt scenario for a feel-good movie. The film loses its focus a bit in the third act, but until then Good Day, Ramón is a heartwarming tale punctuated by moments of true concern for the likable but imperiled young hero. Kristyan Ferrer is a charming young actor with a winning smile (in his breakthrough role in Cary Fukunaga’s Sin Nombre, he played a character named Smiley), which goes a long way toward selling this movie – especially since so much is communicated through gestures and facial expressions. The contributions of writer-producer-director Jorge Ramírez-Suárez (himself a Mexican national who moved to Germany) are skillful and engaging. Despite an ending that strains credulity, Good Day, Ramón stokes the feeling that we human beings are not such awful creatures after all. Sin Nombre
Winner of dual awards for directing and cinematography at this year’s Sundance Film Festival, this immigrant drama is suffused with gritty realism, poetic imagery, and melodramatic hokiness. 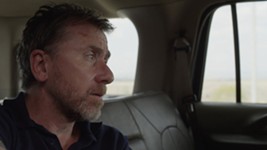