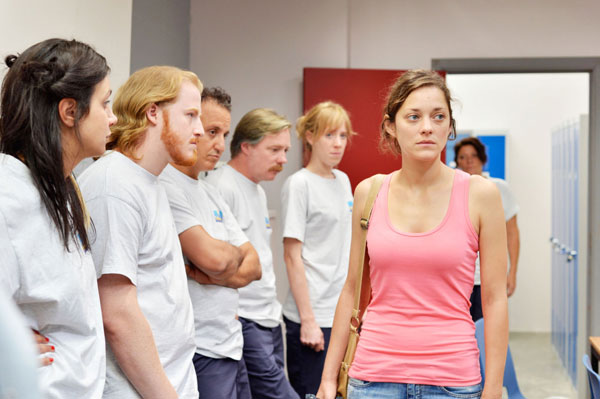 For the past 18 years and over the course of six feature films, Belgian filmmaking brothers Jean-Pierre and Luc Dardenne have carefully chronicled the lives of the underprivileged, the unemployed, and the lost souls who invariably get discarded, as modernity and capitalism move inexorably forward in a society that neither cares for nor wants anything to do with them. These stories of abandoned children, undocumented immigrants, and people pushed to the margins of society have wowed critics (two Palme d’Ors, putting them in rare company) and influenced more than a few directors (paging Darren Aronofsky), but apart from the arthouse crowd, their films have not made much of an impact here in the States. So does recruiting international movie star Marion Cotillard for their new film mark an attempt to break into the mainstream? I’d hazard that it was probably a producer’s call, but the resulting film is an exceptionally crafted drama, anchored by the brothers’ mastery of their skills and Cotillard’s breathtaking performance.

Cotillard is Sandra, a working-class mother employed at a solar panel manufacturing company in a Belgian town, who, upon returning to work after a leave of absence due to a bout of depression, is told she’s been sacked. In her absence, and under questionable circumstances, Sandra’s coworkers have voted to cut up her salary as a substantial bonus for them instead of keeping her on as an employee. After pleading with her boss, she is given the weekend to convince her fellow coworkers to keep her on, with a new vote to occur Monday morning. Hence the title and hence what follows, as we see Sandra go from employee to employee, trying to convince them that they should choose her over the money all of them so desperately need. Aided by her endlessly supportive husband (Rongione, equally amazing, and thankfully not a pushover), we watch Sandra undertake this emotionally crippling task, and at the same time learn about the precarious financial instability of the people with whom she works.

Sounds tedious on paper, I know. But the Dardenne brothers have made a compelling film about an ethical dilemma that evokes a moralism that most filmmakers would give their eyeteeth to capture a fraction of. Halfway through the film you realize that maybe Sandra shouldn’t get her job back, and that her campaigning is causing more harm than good. This recognition evokes the heartbreaking futility of Sandra’s situation in the broader sense of society as a whole. Are we all just cogs in a wheel, ever-replaceable and ever-disposable? The Dardenne brothers make that case, and then deftly subvert it. A tour de force for Cotillard (who is in practically every frame) and another feather in the cap for frères Dardenne, Two Days, One Night is contemporary social realism at its finest, portraying the complicated moral landscape we’re constantly navigating and the difficult decisions this modern world has invariably wrought.