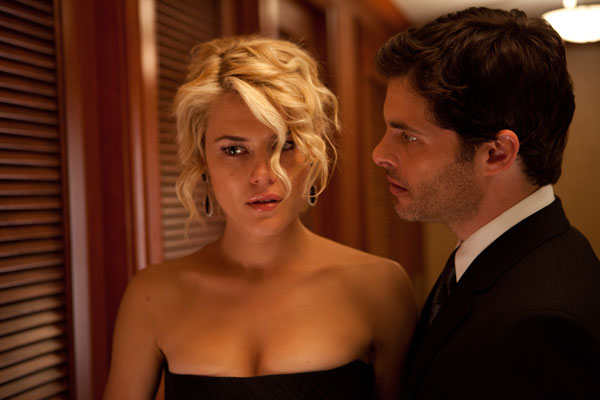 An Agatha Christie whodunit doused in Axe Body Spray, Erik Van Looy’s The Loft marks the English-language remake of his own original Belgian thriller about five dudes determined to discover who among them left a bleeding blonde behind in the secretly shared fuck pad of the title. It isn’t the first remake, either – the Dutch took a crack at it with Van Looy’s help – but the vicarious thrill of getting away with an affair, let alone murder, must carry an international appeal.

Alas, said appeal is combated at every turn by dopey dialogue, an aggressively convoluted timeline, and ripe performances from the likes of Karl Urban (as suave architect Vincent), James Marsden (naive psychologist Chris), Wentworth Miller (timid pal Luke), Eric Stonestreet (obnoxious buddy Marty), and Matthias Schoenaerts (reprising his role as Philip, Chris’ hotheaded half-brother). These five each agree to take a key to Vincent’s upscale condo in exchange for remaining discreet about their mutual indiscretions, and after a year of successfully sneaking around, the men suddenly find themselves confronted with a body in a bed and nowhere else to turn.

The director made an impression with 2003’s The Memory of a Killer, but it’s little wonder why this version – shot in 2011 and since shuffled among distributors – has sat on the proverbial shelf for so long. Despite a premise loaded with potential for temptation and tension, this slickly shot shout-fest gets bogged down in flashbacks, alibis, motives, double-crosses, drugs, druggings, political blackmail, childhood trauma, femmes fatales, homoerotic innuendo, and more red herrings than a bag of Swedish Fish.

Where’s the fun in all of this? These well-to-do men are thoroughly established as amoral misogynists, all burdened by shrewish wives, and the film does little to provide either a rooting interest or a knowing sense of humor about its retrograde gender dynamics. Gone Girl’s perverse sense of wit eased viewers into that movie’s labyrinthine scheming; The Loft instead offers so many shifty glances and shifting allegiances that it nearly qualifies as a tongue-in-cheek parody of the modern erotic thriller. The inclusion of two alluring blondes (Lucas and Taylor, both Aussie actresses and each a veteran of the Transformers franchise) dares to encourage comparisons to the work of Alfred Hitchcock, particularly Rope, but the twists and trysts largely unfold without any palpable sense of passion, lust, or desperation.

Van Looy does pay enough attention to work in a pair of scenes that coyly associate bodily violations involving needles and knives with (improbably modest) acts of intercourse, and he does play up the implication that the fellas’ high-end hideout now doubles as a gilded cage of glass and steel. For the most part, The Loft struggles to engage even on the level of tawdry potboiler, joining the forgettable ranks of 2005’s Derailed and 2008’s Deception as yet another underwhelming one-night stand.

The Memory of a Killer
A hitman who's losing his memory to Alzheimer's anchors this absorbing Belgian policier that's tightly wound and expertly unraveled.