Lemme tell ya, kids these days with their smartphones and video cameras and newfangled temporal relocation devices. The latest high-concept handheld whatsit to come down the pike would be Project Almanac, which transparently hopes to do for the time-travel movie what Chronicle did for teen superheroes – and basically succeeds at fulfilling its own pre-made pitch.

High school whiz kid David (Weston) has just been accepted to MIT. If he doesn’t want his mom to sell the house, though, he’ll have to impress countless scholarship committees. Digging through the basement-stowed belongings of his late father (Weeks), David and younger sis Christina (Gardner) uncover government-contracted blueprints for the aforementioned temporal relocation device. With the help of two smartass buddies (Lerner and Evangelista) and David’s crush, Jessie (Black-D'Elia), this crew manages to turn back the clock, indulging in all sorts of wish fulfillment and improbably catching most of their space-time shenanigans on camera.

Despite the film’s largely hectic point-of-view, first-time helmer Dean Israelite credibly establishes a science-positive environment that ultimately results in less-than-intelligent displays of teenage impulsiveness, and the kids have a believably determined camaraderie as they only ever use the device together to get revenge on bullies, win the lottery, and snag backstage passes at Lollapalooza. A sharper script might have tapped into the current generation’s self-cannibalizing need for insta-nostalgia (epitomized by the ever-present camera and the insistence on a documented life), but writers Andrew Stark and Jason Pagan settle into a decent if formulaic cautionary tale about the timeless nature of regret uniquely enabled by the product placement one has come to expect from producer Michael Bay. (What’s a modern time machine without parts from an Xbox One?)

The story takes an uneven turn toward sentimentality once David takes a solo trip back to undo a mistake and wreaks widespread, present-day consequences for his meddling. He and his pals name-drop pop culture’s most well-known time-travel touchstones throughout, yet fail to heed other movies’ consistent warnings against altering the course of history. As the mood dampens and the pace quickens, the strain on established logic grows heavier and it’s hard to not feel like Almanac’s earlier freewheeling potential has deflated on its way towards an inevitable conclusion.

More importantly, Project Almanac exists to confirm what we as a culture have long suspected: that the world won’t end with either a whimper or a bang, but all because of an Imagine Dragons concert. 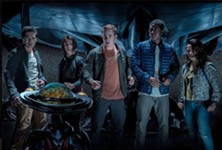