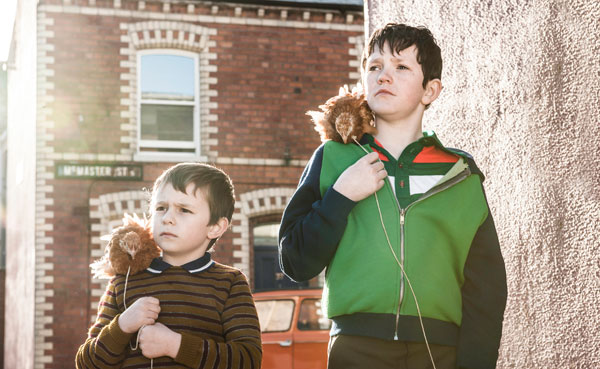 Despite language barriers, this year’s Academy Award nominees for Best Live-Action Short Film are unified by a general desire to tug at one’s heartstrings.

The most immediately arresting segment would be Mat Kirkby’s “The Phone Call,” centered on Heather (Sally Hawkins), a crisis center hotline worker trying to keep a suicidal Stan (Jim Broadbent, heard but never seen) on the line while she pries clues about his identity through their conversation. For much of its 21 minutes, the drama plays purely and remarkably on Hawkins’ increasingly desperate face, which in turn makes the film’s upbeat coda feel jarringly disingenuous.

A slice of Northern Irish history provides the setting for “Boogaloo and Graham,” a more nakedly sentimental coming-of-age yarn concerning two Belfast boys and the chickens they raise as pets amid the Troubles of 1978. Director Michael Lennox does his best Rob Reiner impression here, laying in a wistful voiceover amid playful hijinks and the occasional pocket of darkness before capping things off with a feel-good doo-wop tune.

“Butter Lamp (La Lampe au Beurre de Yak)” is a more pointedly political contribution, spending the better part of its running time dryly observing rural Tibetans being photographed against a variety of exotic backdrops before delivering a somber punchline. Israel’s “Aya” similarly overstays its welcome, taking a slight meet-cute premise full of lovely potential (a married woman impulsively adopts the role of airport chauffeur for a Jerusalem-bound stranger) and stretching it out to an almost interminable 40 minutes.

Running at a more bearable 25 minutes, “Parvaneh” does better justice to its character study of an Afghan immigrant (Nissa Kashani) trying to send money back home to her family from Zurich, where she works illegally, and forging a connection with a young Swiss woman in the process.