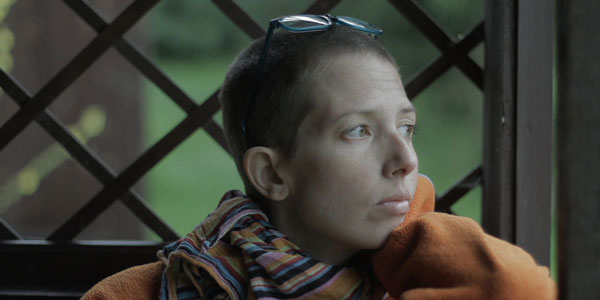 Owing to their longer running times, the five films nominated for Best Documentary Short Subject have been divided into two programs for this limited theatrical run. Both programs are punishing, as the collected films examine suffering from different angles.

Program A consists of the two longest shorts, and they’re two of the best in the batch. “Joanna” is a slice-of-life portrait of a woman facing death. Director Aneta Kopacz’s intimate but unobtrusive camera catches the day-to-day interplay between the title’s Joanna – a Polish blogger, wife, and mother who has terminal cancer – and her inquisitive young son John. Kopacz doesn’t foreground Joanna’s diagnosis, focusing instead on leisurely scenes of Joanna asking her son about his crush, of John chopping vegetables and blushing when he sees his mother’s bra. What results is a candid and deeply moving document of this particular mother/son bond.

“Crisis Hotline: Veterans Press 1” is also about human bonds forged, this time between strangers over the phone at the Veterans Crisis Line, which fields some 22,000 calls a month from veterans contemplating self-harm. A riveting HBO documentary directed by Ellen Goosenberg Kent, the film opens with a sobering statistic – 22 veterans a day commit suicide – then zeroes in on the team of people trying, one call at a time, to beat back that statistic. We never hear or see the callers, only the responders’ end of the conversations, but a vivid picture emerges of both sides of the line, their agony and their empathy.