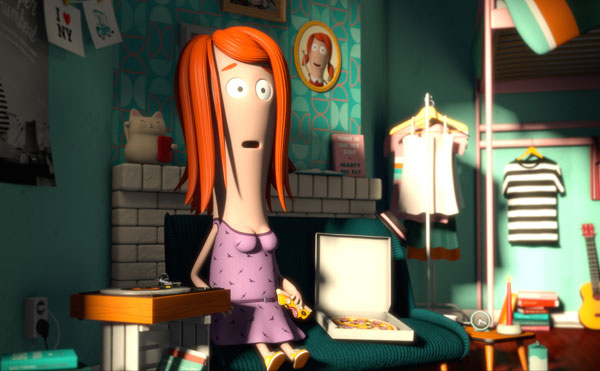 In keeping with recent tradition, this year’s Academy Award nominees for Best Animated Short Film will be showcased in a collective block across the country, reflecting a diverse array of animation techniques from all around the world.

“Feast” is likely the most widely seen of these candidates, having preceded most showings of Big Hero 6 last fall. The story of a spoiled puppy who comes to resent his owner’s newfound interest in a woman with much more reasonable eating habits, director Patrick Osborne’s wordless work doesn’t skimp on charm or style, even if it feels like Disney is still chasing after the decades-spanning emotional weight of Up’s opening sequence several years later.

Even more strikingly realized is “The Dam Keeper,” from Pixar veterans Robert Kondo and Daisuke “Dice” Tsutsumi. Similarly dialogue-free aside from bookends of narration, this 18-minute-long tale of a young pig keeping the literal and figurative darkness at bay in his small village, where he is treated as a pariah by other animals, uses a painterly approach to bring this fable to rich life.

Simplicity is the name of the game for two of the other shorts, Canada’s “Me and My Moulton,” about a young Norwegian girl and her sisters eagerly awaiting their first bicycle, and “A Single Life” from the Netherlands, in which a lonely woman begins skipping through her own timeline with the help of a cautionary vinyl record. Each is pleasant enough, although their narrative slightness is matched by their relatively basic styles of animation.

Lastly is “The Bigger Picture,” Daisy Jacobs’ bittersweet portrait of two English brothers caring for their elderly mother. Over the course of just seven minutes, it reckons with the burden of dying parents and sibling rivalry with striking expressionism, as Jacobs incorporates two-dimensional, life-size renderings of her characters within tangibly three-dimensional environments and allows their emotions to spill out into the world whenever appropriate.

The program is rounded out with a selection of four additional recommended animated shorts, including Bill Plympton’s “Footprints.”