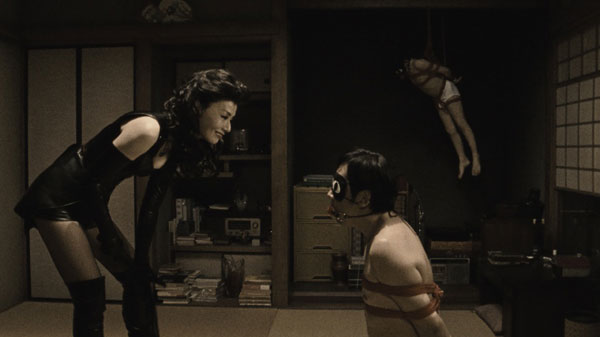 Pleasure is pain is surreal comedy and a meditation on modern-day Japanese mores in Matsumoto’s lash ’n’ laugh leatherfest. As Drafthouse Films founder Tim League pointed out in a lengthy essay about the director on Drafthouse.com the other day, Matsumoto is barely known in the U.S., but is widely considered a comic genius of the first order in his native country. If you know him at all, it’s probably from seeing his 2007 head trip (and Fantastic Fest favorite) Big Man Japan, wherein Japanese cinema’s fondness for giant monsters stomping on cityscapes is deconstructed to the point of granular absurdity. R100 isn’t quite as entertainingly incomprehensible as that movie, but it certainly runs the gauntlet from the outer limits of violent, fourth-wall-shattering yuks to the inner mind of Leopold von Sacher-Masoch – and by extension Japanese culture itself. Heady stuff, indeed, but perfect midnight-date movie fare if you’re, uh, in the mood.

Nao Ohmori (Ichi the Killer himself) plays seemingly meek department-store salesman and family man Takafumi Katayama, who enrolls in a yearlong S&M-by-surprise deal with no exit clause. Although he’s randomly kicked, punched, spat upon, and generally battered about like a rag-doll salaryman, Takafumi’s physical and spiritual joy-overload radiates, literally, from his face at every bruising turn. It’s only when the icy army of warm leatherettes begins to invade his workplace and home – potentially endangering his pre-adolescent son – that he tries, and majestically fails, to call the whole thing off. That’s when things get severely weird.

While it’s surely the only movie of its kind that will be playing on U.S. screens this year, R100 never quite blew my mind in the way that Big Man Japan did. Part of this is due to the fact that, up until its out-of-control third act, the sexualized violence onscreen remains (kinda sorta) within the realm of the sensible, if not explicable. Takafumi’s plight can be viewed through multiple subtexts: the ongoing Japanese recession, that country’s culture of conformity (see the Zellner Brothers’ forthcoming Kumiko, the Treasure Hunter for more on that), and Japanese filmmakers’ penchant for the outrageous, both cinematically and sexually. It can even be watched as a (seriously bent) straight comedy. At one point, a gnarly stand-in for director Matsumoto cryptically intones, “You’ll have to be 100 years old to understand [this movie].” The statement is probably accurate, but that doesn’t mean you won’t be able to dig the ever-mounting madness of R100 while you’re still young enough to take a stiletto-heeled kick to the face and walk away slaphappy. 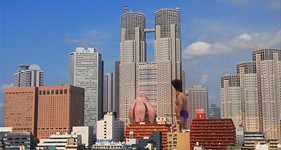