The end of each year brings with it a chill in the air of the film community as the perhaps-too-cynical label of “awards bait” gets bandied about for every inspirational World War II drama and biopic involving an apparent disability. In that realm of calculation falls the un-vanity project, in which Charlize Theron (Monster), Reese Witherspoon (Wild), and other proven talents make a conscious effort to put on a brave face by glamming their appearance down.

Cake marks American sweetheart Jennifer Aniston’s opportunity to flaunt facial scars and brood greatly, qualifying under the radar last December to nab a Golden Globe nomination, but failing to capitalize on any similar Academy Awards love upon its return to theatres. This kind of positioning can be a canny maneuver by distributors to draw curious audiences to a modest character study they might not normally seek out, but frankly, Cake isn’t remarkable enough to be a part of the conversation.

When first we meet Claire Bennett (Aniston), she’s bringing down her support group of fellow chronic pain sufferers, pithily dismissing their collective grief over the suicide of former group member Nina (Kendrick). Maybe it’s just the pills and the pain talking rather than her personality, but she treats her housekeeper (Barraza), physical therapist (Gummer), and estranged husband (Messina) with the same caustic attitude. Only the hallucinatory – or perhaps otherworldly – reappearance of Nina causes Claire to reach out to Nina’s widower, Roy (Worthington), and confront a bit of her own grief in the process.

Nina’s ghost marks the lone fantastical embellishment in Patrick Tobin’s screenplay, settling instead into a series of supposedly grounded yet evidently contrived encounters and setbacks. It doesn’t take long to learn the cause of Claire’s immediate physical pain, but Tobin and director Daniel Barnz (Beastly, Won’t Back Down) play coy with the source of her deeper emotional wound, turning a potentially resonant exploration of loss into a hollow game of hide-the-trauma.

The ensemble generally holds its own in spite of the schematic plotting, with Barraza unofficially reprising her role from Babel, Worthington trying to match our lead’s penchant for repressed emotion, and Messina exhausting his supply of emotional support while a sardonic Kendrick hovers on the margins. All things considered, Aniston is rightfully the star of the show, finding the way to her character’s heartache beneath a believably brittle temperament and remaining credible even as the film scrambles to rationalize Claire’s callous demeanor.

At the end of the day, Cake at least stands better as a showcase for the potential dramatic chops of the once and future Rachel Green than it does as the latest life-affirming indie. Hopefully, the next time Aniston goes fishing for awards, she uses a more convincing breed of bait to do so. Won't Back Down
Two mad-as-hell mamas take back their public school from the bureaucrats and unions that seemingly enforce the status quo. 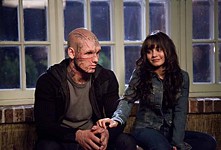 Beastly
Beauty and the Beast is refashioned here for the contemporary teen set and stars I Am Number Four's Alex Pettyfer and Vanessa Hudgens.