Clint Eastwood’s second film of 2014 (Jersey Boys was released in June) is also his best film since at least 2008’s Gran Torino. With it, the filmmaker revisits his long preoccupation with guns and their capabilities, although the recoil of American Sniper doesn’t have the same moral reverb of Eastwood’s finest work. Still, the action sequences are packed with zealous clarity and tense dynamism.

Based on the memoir by Chris Kyle (written with Scott McEwen and Jim DeFelice) – who, during the course of four tours in Iraq as a Navy SEAL, became the most prolific sniper in the annals of U.S. military history – the film exists in a black-and-white world in which only good and evil abide. In American Sniper, no Muslim punks are given even a split second to consider whether they’re feeling lucky that day; they are felled precisely and instantly by a distant marksman. Kyle’s Manichean values are instilled by the time he is kindergarten-age by a father who teaches him to be a proficient hunter, and lectures him about the ways of the world: People are either sheep or wolves, although there exist a few souls “blessed with the gift of aggression” who are the sheepdogs protecting the flock from the wolves. That’s Chris Kyle: a sheepdog with a Colt.

After spending the last several years firmly establishing his comedic acting chops (The Hangover, Silver Linings Playbook, American Hustle), Bradley Cooper is a dramatic revelation as Kyle. Bulked up and muscular, the actor functions here with an economy of physical artifice and language. The downside of this is that viewers receive little insight into what Kyle is experiencing emotionally. However, it’s probably also true that a sniper must maintain a certain psychological numbness in order to perform the job as perfectly as Kyle does. He’s not a one-dimensional character: We witness his macho jocularity with his military brothers, the aimless direction of his life before joining the SEALs, and his love for his wife Taya (Miller, in a thankless role) and children. Despite Taya’s entreaties, however, he re-enlists three times because his sense of duty to his comrades overrides his family responsibilities. His mantra is “God, Country, Family” – in that order.

While Eastwood’s touch is most clearly evident in the film’s combat sequences in Iraq, the screenplay by Jason Hall seems to favor Kyle’s difficult reentry into civilian life. The cocksure confidence and the good-and-evil dichotomies that served him so well while in country are liabilities back home where there’s a lot more shading between good and evil. Kyle’s taciturn countenance adds to the film’s amorphousness during this section. Back in Texas, Kyle finds no sense of purpose, and his tragic, ultimate fate is left to an onscreen sentence at the end of the film. The outlandish episodes that followed Kyle’s stateside return (the widely publicized Jesse Ventura incident, among other curious incidents) are completely absent from the film, and the book’s jingoism and cultural prejudices are played down. To its credit, the film shows no interest in creating blind heroics but instead uphold the nickname Kyle earned in Iraq: the Legend. 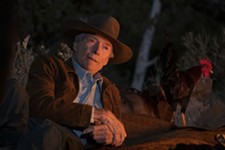