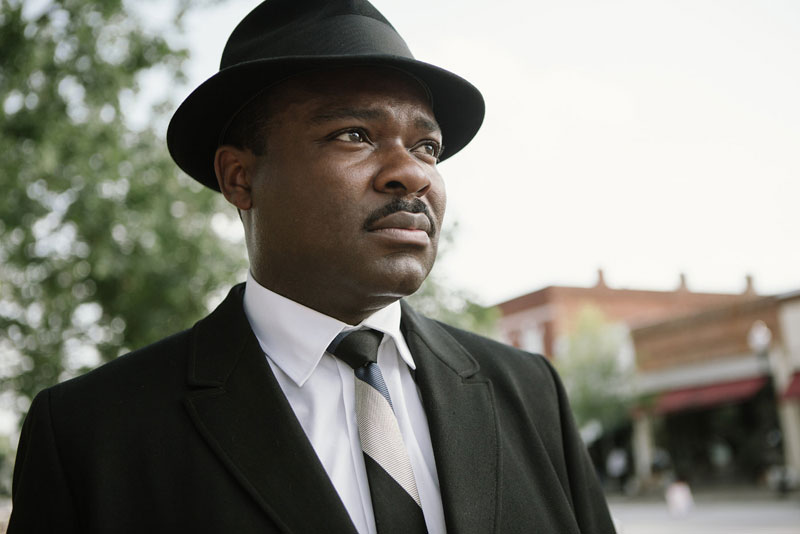 Nearly 50 years to the day of the Selma, Ala., voting-rights marches that are depicted in the film, comes this screen effort that not only refreshes our collective memory of America’s tortured racial history but also questions our nation’s reformation over the intervening decades. (Those of us in Texas, who are now required to show a legal ID in addition to a voter registration card in order to vote, might feel the brunt of that latter question quite keenly.)

Although Selma is dramatically uneven overall, the film is a commendable historical drama that sidesteps the pitfalls of adulatory biopics and great-man approaches to encapsulating bygone events. Dr. Martin Luther King Jr. (Oyelowo) is depicted as the most prominent spokesman for and leader of the civil rights movement in the U.S. (the film opens with King rehearsing his Nobel Peace Prize acceptance speech, and the game-changing March on Washington occurred prior to the events in Selma). Yet King is also shown as a conflicted and flawed human being, which is something of a first for our popular culture which has been more likely to thrust King into an impossibly iconic role as a saint of nonviolent resistance and champion of his race. Aside from achieving a startling resemblance to King, Oyelowo delivers a magnificent performance, inhabiting the character to such a comfortable degree that everything seems just right – from the speech cadences to the self-doubt that causes him to phone up Mahalia Jackson to sing him a spiritual to bolster his faith.

The verisimilitude is all the more remarkable for the fact that the filmmakers were unable to use the exact words of King’s speeches and utterances due to copyright issues and the notoriously litigious King family estate. Director DuVernay and first-time screenwriter Paul Webb miraculously work around these limitations, but even as King’s dialogue sounds natural and/or a close approximation of what was said in reality, most of the rest of the film’s dialogue does not fare as well. Almost every character speaks with an oratorical verve, and their declamations are often accompanied by swelling music and other significant cues. Characters tend to declare rather than converse.

As noble as are Selma’s efforts to humanize King and show that his voice was but one of many in a movement, the other characters still seem secondary and incompletely realized. The film takes little time to differentiate among King’s various and everpresent lieutenants in the Southern Christian Leadership Conference (SCLC), although the fractious interplay between King and the Student Nonviolent Coordinating Committee (SNCC) members who had been organizing in Selma well before King’s arrival is quite illustrative of the fact that strategies and goals were/are not always in universal accord. The film’s portrayals of President Lyndon B. Johnson (Wilkinson), who despite being in agreement with civil-rights goals disagreed powerfully on legislative timing, have proved historically problematic for many, but it’s nevertheless refreshing to see the strategy sessions between King and Johnson presented from a black perspective. Still, the depictions of other white players (Tim Roth as Gov. George Wallace and Dylan Baker as J. Edgar Hoover) come off like Snidely Whiplash-like caricatures.

Most revealing in Selma is its demonstration of the idea that the strategy of nonviolent protest cannot exist in a vacuum. Nonviolence needs its opposite – violence – to carry the message. In the film, Johnson advises King to make sure that the upcoming march produces images of protesters being beaten and attacked on the Edmund Pettus Bridge, in order to galvanize the sympathies of white egalitarians, much like the 1963 Birmingham church bombing that resulted in the deaths of four little girls had done. Nonviolence can be a tricky strategy when it depends on its opposite in order to be heard. Middle of Nowhere
In this Sundance-honored film, a woman has to figure out what to do after her husband is sentenced to eight years in prison.