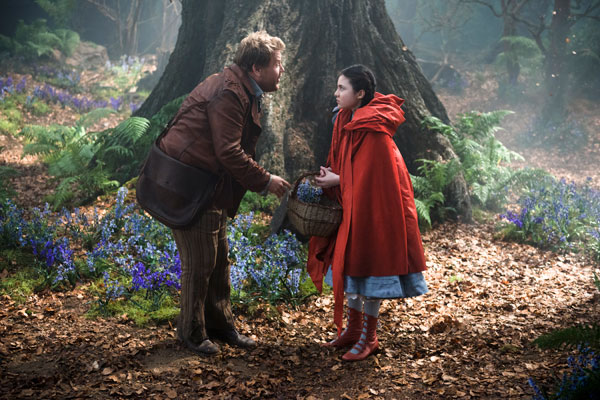 The ambitious Stephen Sondheim/James Lapine musical Into the Woods is a pastiche of classic fairy tales turned on their heads. In this world of magic beans and glass slippers, princes aren’t always charming, wishes sometimes bring trouble, and happily ever after is an elusive notion at best. It’s a bedtime story for grownups, one that first celebrates the traditional elements of childhood narratives like Little Red Riding Hood and Cinderella and then subverts them like a revisionist version of Grimm’s. (Walt Disney – whose studio is releasing the film – is probably rolling in his grave.)

The first two-thirds of the film adaptation of this tricky musical moves briskly, its overlapping stories moving toward the crowd-pleasing happy endings you’re expecting. But when the third act takes things one step further and somberly rewrites those familiar finales, the fun begins to evaporate. No doubt, many will feel a little cheated by this wrench in the works, which is precisely Sondheim and Lapine’s intent. Director Marshall tries mightily to invigorate this challenging section of the film, but it’s an uphill climb. The odds are stacked against him.

The musical threads in Sondheim’s score wind their way through the film effortlessly, and the performers relish the razor-sharp lyrics he’s given them. (These interludes aren’t so much songs as they are sung words.) The film’s production values (particularly the titular woods – lovely, dark, and deep) are top-notch. As the good-hearted baker who must retrieve the four ingredients necessary to lift the curse of infertility that has left his marriage childless, Tony-winner Corden is marvelous. The man knows how to deliver a funny line. Most of the cast holds their own, particularly youngster Crawford, as the female-empowered Red Riding Hood, and Huttlestone as the impetuous Jack (of beanstalk fame). Somewhat surprisingly, the impossibly good-looking Pine camps it up incessantly as Cinderella’s narcissistic love interest. He’s good for some laughs, but the character seems like someone from another movie. And as the ugly and bitter witch who yearns for stolen life, Streep’s performance, for the most part, is strangely joyless. Once upon a time, this actress knew how to keep it fresh when going over the top (Death Becomes Her, anyone?), but here she’s hardly bewitching. Pirates of the Caribbean: On Stranger Tides
Johnny Depp sails the seas once again.