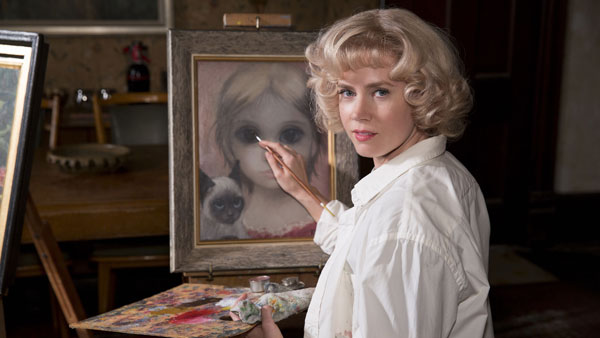 Before memes were memes, they were fads and in the early Sixties one of the most popular was the ubiquitous work of the artist who signed the paintings “Keane.” They invariably featured the hallmark imagery of tatty waifs staring out of the canvas through grotesque, oversized eyes while maintaining a pleading, hopelessly hopeful visage. Keane’s ocularly oversized adolescents were disconcerting, even creepy-kitsch; they often looked as though they’d just been liberated from Dachau, or worse. Of course they were a near-immediate hit. Millions of originals, prints, postcards, and ephemera were sold – my grandmother had a pair – and Walter Keane became a very wealthy individual. Except that he wasn’t the weirdly talented individual his public persona indicated, and he never painted a single “big eye” in his life. Those brushstrokes belonged solely to his wife, Margaret, a fact Walter Keane never acknowledged until she forced his hand in a spectacular court case.

Fertile ground for Tim Burton, then, who casts Christoph Waltz (Inglourious Basterds’ Nazi colonel) as the maniacally charming schemer Walter and Amy Adams as the long-suffering Margaret. Burton has always had an eye for stylistically exaggerated period oddities (Ed Wood deserves every bit of the cult-classic status it has accrued since its release), and Big Eyes is supersaturated with Sixties detail that rivals even Mad Men. Watching the predatory Walter meet-cute with the recently divorced Margaret at a San Francisco artists market, you already glean that this guy’s a shark in boho clothing. The core of the story here, though, isn’t Burton’s usual obsession with outlier obsessives, but a portrait of a brutal marriage in freefall. Waltz may play Walter as a mincing gadabout and Lothario whose real talent lies in self-promotion, but it’s Adams’ Margaret and her dawning realization of her own inner strength that holds the film aloft.

But for all that, Big Eyes feels like Burton-lite. There’s precious little of the director’s trademarked, hallucinatory vibe here, although one sequence, in which Margaret envisions herself surrounded by walking, talking, big-eyed shoppers, comes close. This is Burton’s most mainstream film to date, which isn’t to say it’s not an eccentrically entertaining ride. It is, but minus the kooky occult élan you expect from the man who made Edward Scissorhands. It’s a Lifetime movie, as directed by, well, you know who.