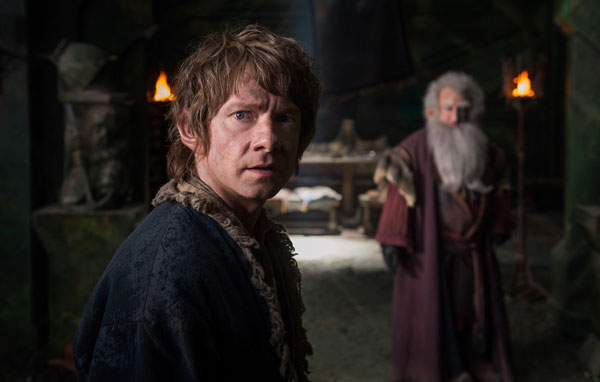 The Hobbit: The Battle of the Five Armies

Is it over yet? What should have been a tight, two-film take on J.R.R. Tolkien’s 320-page prequel to the Lord of the Rings trilogy became, in Peter Jackson’s enormously capable but too often overlong telling, something of a trial to sit through. The beginning of master burglar Bilbo Baggins’ long and fraught journey to the Lonely Mountain, Erebor, in 2012’s An Unexpected Journey, was unexpectedly yawn-inducing and felt as padded as a Hobbit’s hairy foot soles. The trilogy picked up some much needed Sturm und Drang the following year; there’s nothing like a dragon voiced by everyone’s current favorite Brit (Cumberbatch) to quicken the pulse and draw the eye of both the audience and Sauron. However, The Battle of the Five Armies – this concluding chapter of the Jacksonization of Tolkien – finally gets almost everything right, and the concluding, nearly 60-minute melee is a sight to behold.

Spoilers ahead: Picking up exactly where The Desolation of Smaug left off, the dragon is quickly put to an end, but not before setting alight most of the good humans of Lake-town. The survivors, led by dragon-slayer Bard (Evans), regroup outside the inhospitable and ruined battlements of Smaug’s former redoubt of Erebor. Things are just as grim inside, however, as Thorin Oakenshield (Armitrage) comes down with a sudden case of “dragon fever,” aka greed – a running theme throughout Tolkien – and walls himself, his dwarf brethren, and Bilbo inside the great hall. Meanwhile (and it seems there’s always a meanwhile in Middle-earth), Gandalf is freed from Sauron’s grasp by Galadriel (Blanchett) and Elrond (Weaving), dwarf Kili and elf Tauriel (Lilly) make brave battle-eyes at each other, and what looks to be an army of 10,000 pasty orcs led by Azog (Bennett) swarm Erebor in preparation for the final conflict. (Also showing up: giant bats and Billy Connolly as Thorin’s ebullient cousin, Dain.)

Peter Jackson’s love of God’s-eye camerawork when it comes to masses of armies clashing has not diminished over the franchise, and this Five Army Battle, despite sounding suspiciously like a dodgy Chinese menu item, is indeed everything a Tolkien nerd could ask for. More so, really, since Jackson continues his habit of adding his own personal touches to the canon. That said, the film gains much by adding liberal dollops of non-Tolkien weirdness, as when Thorin hallucinates drowning in Smaug’s golden hoard, or when Gandalf and the White Council fend off the Nazgul atop Dol Guldur.

The performances have remained continuously excellent throughout The Hobbit trilogy, and they remain so here; likewise Howard Shore’s score, which is particularly righteous – bloodthirsty when it needs to be, keening when a particularly major character is cut down. All in all, an admirable capstone to one of the great mytho-cinematic achievements of all time (I include the Lord of the Rings trilogy in that statement). Less talk, more action, and at the end, bringing both Bilbo and his audience full circle, home at last. 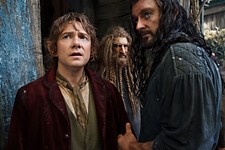 The Hobbit: The Desolation of Smaug
Superior in nearly all ways to its predecessor, this second film in the prequel to The Lord of the Rings trilogy is a welcome surprise.