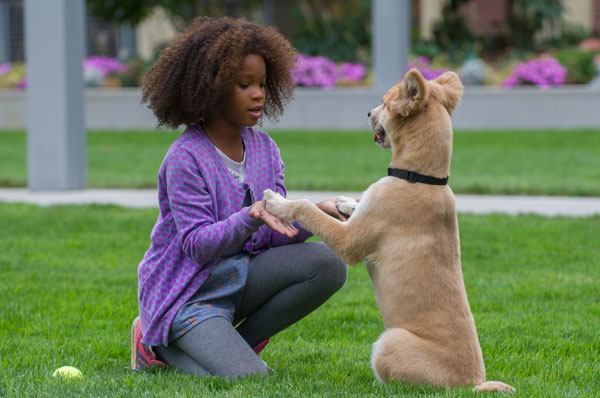 This modernized Annie opens with a bit of bait and switch by introducing a little white girl with boingy red curls. She looks like the make and model that usually plays Annie onstage and onscreen. Then this first Annie takes a seat, and her classmate, a second Annie, goes to the head of the class. This Annie – our true Annie – is played by the African-American actress Quvenzhané Wallis (Beasts of the Southern Wild). Maybe the filmmakers meant this gotcha as an affectionate nod to Taylor Richardson (who lately played Annie on Broadway and plays the decoy Annie here). But the moment plays more like a dog that’s done a backflip and is awaiting a scratch behind the ears. For what? Having the boldness of vision to cast an Oscar-nominated actress whose profound cuteness is so universally accepted you can hardly hear the music over your own inner awwwww?

Yes, this Annie is different – it’s of this time. (So long, Punjab.) Director Will Gluck and his co-writer Aline Brosh McKenna have updated the Depression-era-set playbook of the 1977 musical to contemporary New York. Little Orphan Annie is now a foster kid in the home of the drunken has-been Ms. Hannigan (Diaz), whose one lick with fame was as a back-up singer in C+C Music Factory. The Daddy Warbucks character has molted to reveal cell-phone mogul Will Stacks (Foxx); running for mayor, he hopes to get a boost in the polls by taking in Annie for a spell. Annie, that lovable imp, casts a spell of her own.

Gluck’s remake isn’t the train wreck that the first trailer – full of clunky, pop-culture punch lines and overproduced pop music – portended. A train wreck would be more interesting. Annie is more like a placid drive through flatland, with the occasional cow spotting to break up the scenery. It’s corny, but sometimes genuinely funny. Gluck has a couple of witty sex comedies (Easy A, Friends With Benefits) under his belt; he’s good with one-on-one, and he gets a nice rapport going between Wallis and Foxx. But a natural at musical direction he is not. The barnstormer “It’s the Hard-Knock Life” is shot in a cramped Harlem apartment; you can feel the camera backing into high corners and low crannies, trying to find a decent angle. Songs that take to the street have more room to move, but the choreography is limp and uninspiring. A few new songs have been added into the mix to give Foxx (a terrific singer) and Diaz (not so much) more screen time, and the new tracks are forgettable, then infuriating once the realization dawns that “You're Never Fully Dressed Without a Smile” has been cut for time. (It plays over the end credits, brought up to current code with platitudinous lyrics and sung by Sia.)

Little girls will love it. I used to be a little girl once, too. I didn’t care much for the Top 40 glossy coat slathered over every song, but this heart will never harden to a spunky kid who’s certain the sun’ll come out tomorrow.