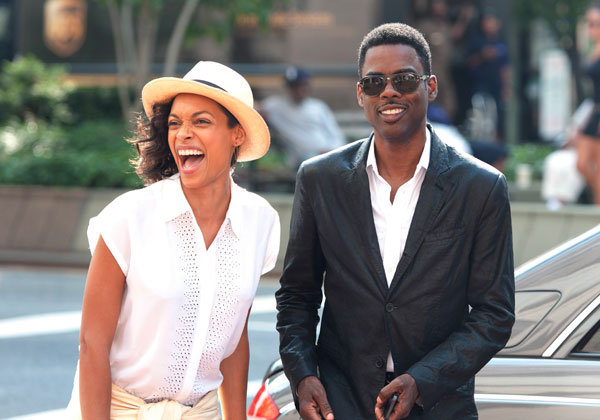 For the last two decades, Chris Rock has been swinging at film success as an actor, screenwriter, director, and producer with varying results, often finding his greatest success as a second banana in films by his pal Adam Sandler or when voicing an animated character in the Madagascar franchise. A brilliantly funny comedian, Rock is not a natural actor and often projects a gangly awkwardness in his screen characters. Top Five – which Rock wrote, directed, and also stars in – is the movie that breaks the curse. Top Five is trenchantly funny, dramatically engaging, and thoughtfully of-the-moment. Some reviewers have called Top Five Rock’s Annie Hall or Stardust Memories, but that’s mostly for the recognition that both Rock and Woody Allen started as gag writers and turned into auteurs. Richard Linklater’s Before trilogy, with their walk-and-talk perambulations, seems a more apt comparison (as though Rock’s Eric Rohmer-inspired film I Think I Love My Wife and his co-starring role in Julie Delpy’s 2 Days in New York didn’t already point in that direction).

Rock plays Andre Allen, a stand-up comedian who has parlayed his humor into a successful film career, particularly as the star of the Hammy the Bear crime-fighting franchise. After three Hammy films, however, Andre wants to be taken seriously (a desire curiously shared by the star of the Birdman franchise in another film from this season), although he also fears that now that he is four years sober, he is no longer funny. As we encounter Andre, it is the opening day of his new film Uprize, a vanity project he’s made about the 19th century Haitian slave revolt that kicked off the Haitian Revolution. Andre is out and about, flacking the doomed film across New York City, although wherever he goes, the public still calls out to Hammy and lines snake through theatre lobbies to get into Tyler Perry’s next Madea movie. Andre’s opening weekend is due to culminate with his mega-hyped, televised marriage to a big reality-TV star (Union).

Chelsea Brown (Dawson) is a journalist from The New York Times, who is shadowing Andre for the day. She asks him hard and direct questions about why he’s not funny anymore, and although she’s initially an irritant, Andre grows to respect and care for her. Their relationship is sealed as they walk and talk through the streets of New York, Dawson and Rock making a charming pair as they joke, spar, and uncover deeper aspects of each other. Rock’s performance is the best of his career, and most of the supporting actors are terrific, too. A chastening visit back to the projects where Andre grew up is suffused with realistic conversations and barbs, and is one of the film’s standout moments. A delightful assortment of cameos by Sandler, Jerry Seinfeld, Whoopi Goldberg, and DMX also sweeten the pot.

The semi-autobiographical nature of Rock’s film makes Top Five’s satiric points about black performers in the entertainment industry fall all the more precisely. There’s also a crudeness to some of Rock’s humor, but it hardly ever passes the line into truly rude or nasty. Without giving away an essential story conceit, its presence nags because it reveals an essential misunderstanding of how a newspaper like the Times operates. The conceit bothered me tremendously upon first viewing, but the second time I watched Top Five the film’s authenticity suffered little from the rickety fact-checking.

Everywhere in America these days, people pay lip service to the idea of conducting open and honest conversations about race. Due to a fluke of timing and its entertaining quality, Top Five should help get the ball rolling. I Think I Love My Wife
Who would have ever guessed that Chris Rock would be the guy to film an American remake of Eric Rohmer's meditation on fidelity, Chloe in the Afternoon? Head of State
On stage, Chris Rock is a force to be reckoned with, a shrewd and sharp-tongued stand-up comic with real balls. So why does he come ...