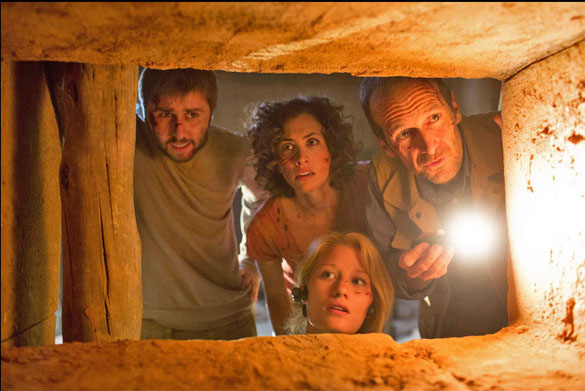 Protesting the use of satellites by whippersnapper archeologists like his own twentysomething daughter, Nora (Hinshaw), veteran researcher Holden (O’Hare) decries, “Everyone’s losing the raw sensation amid all this technological mediation!” It’s a lousy line that nevertheless suits The Pyramid and its haphazard insistence on cramming a creaky tale of dark tunnels and ancient evil into a newfangled found-footage format.

Amid much political protest in the summer of 2013, Nora and Holden have begun excavating a rare three-sided pyramid hidden beneath the sands of Egypt. Along with rover jockey Zahir (Amir K), news reporter Sunni (Nicola), and cameraman Fitzie (Buckley), the intrepid explorers venture where they dare not, soon finding themselves lost – and, of course, not alone – within a booby-trapped labyrinth.

Arriving on the heels of a similarly shaky subterranean outing, As Above, So Below, this directorial debut from established horror writer Grégory Levasseur (High Tension, Mirrors) doesn’t take long to willfully abandon its mockumentary pretense, cutting away from handheld and head-mounted cameras to more objective angles as the growing body count necessitates. The shift would be more bothersome if it didn’t result in the film’s few striking images, like the sight of a floor cracking beneath our protagonists’ feet as seen from directly overhead.

No matter the vantage point, though, consistent claustrophobia and compelling characterization are squandered in favor of loud jolts, louder arguments, handy bouts of visual interference, and dodgy stretches of digital effects. Of all the red shirts in waiting, character actor O’Hare fares best, a total pro when it comes to delivering arcane hooey and desperate guidance, and gorehounds may find themselves tickled by a half-silly, half-squirmy sequence involving a pit of spikes and some hungry critters, if little else.

It hasn’t been so long since Neil Marshall’s The Descent worked wonders with underground duress, even making room for a modicum of subtext along the way. In comparison, The Pyramid is a mere matinee meat-grinder, neither terribly original nor all that tense. The real pyramids have been remembered for millennia. This one will be lucky if it lasts a week. 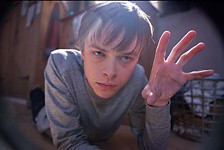 Chronicle
Like a marriage of Cloverfield and Carrie, Chronicle blends faux-naif techniques with a teen telekinesis plot and gets fresh results.