“If it’s in a word, or it’s in a look, you can’t get rid of the Babadook,” reads weary Amelia (Davis) to her frightened son Samuel (Wiseman) from a book that has mysteriously appeared in the young boy’s bedroom.

Australian writer/director Jennifer Kent makes a stunningly assured feature filmmaking debut with this unnerving thriller, which has been racking up numerous awards on the festival circuit and in year-end tallies. It’s more a psychological horror tale than a blood-and-guts outing, although the filmmaker doesn’t stint on either score. The Babadook owes a clear debt to films like The Exorcist in which demon children are not to be taken lightly. Yet it’s unclear if it’s the child or the mother who has unleashed the scary monster.

At the outset, we find single mom Amelia exhausted due to the sleeplessness of near-7-year-old Samuel, who fears monsters that he believes to be hiding in closets and under the bed. Samuel may not yet be a demon child, but he is unquestionably a problem child. In order to slay monsters, he has concocted a lethal dart thrower, which has caused his expulsion from school. Other children find him weird and unlikable, and Amelia, too, has a tendency to recoil from her son’s touch. Also, the ill-defined trauma of her husband’s sudden and violent death still haunts Amelia.

Things escalate when Mister Babadook, an ominous children’s pop-up book, mysteriously appears in Samuel’s bedroom and warns against a dark and evil creature who cannot be gotten rid of once he’s been allowed in to one’s home. The image of the Babadook is primitive yet bone-rattling: a sturdy, all-black silhouette appears as if part scarecrow, part tombstone. Extended whiskers or claws attached above and below these talons seem sharper and sootier than Freddy Krueger’s mitts ever were; a top hat lends the image a perverse magisterial touch. He knocks three times: “Baba dook-dook-dook.” Despite tearing up the book and leaving it in the trash, Amelia finds it again in her son’s room pasted together and more threatening than before. Clearly, they’re being stalked – but by a storybook character?

Amelia grows more exasperated and sleep-deprived by the day. She resorts to tranquilizing her son so she can get some rest. But still, the Babadook knocks. Samuel keeps squalling about not wanting his mother to die, but is he issuing a threat or expressing genuine fear? Essie Davis delivers a brilliant performance, notching distinct levels of fatigue and disorientation that grow ever more nuanced. Her skillful display somewhat makes up for the uneven performance of the child actor Noah Wiseman.

The crisp imagery (by Radek Ładczuk) creates a true sense of menace amid the household banality. Tales about mothers who fear their offspring also strike at a very primal level of mythic storytelling. Vigilance is the only means of protection against creatures from the id.

Screw Heisenberg: It is the Babadook who knocks.

This review has been revised since its original publication online on September 21, 2014. See "Bedtime Stories That Bite Back," Dec. 5, for an interview with Jennifer Kent. 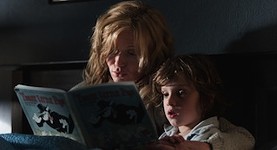 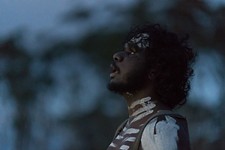