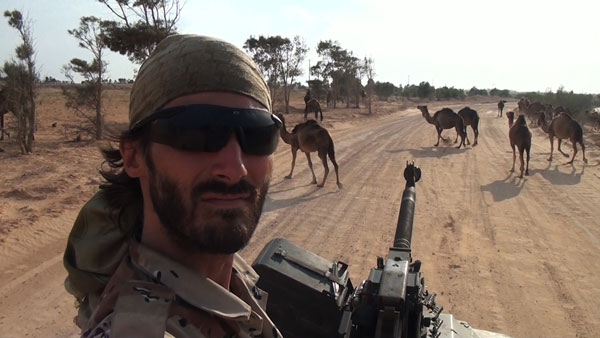 The most infuriatingly frustrating documentary I have seen in a long time, this tracks lonely, alienated American suburban youth Matthew VanDyke's decision to reinvent himself as an action hero. He travels to the Middle East, where he buys a motorcycle to tour the region.

Carefully videotaping the whole experience, he literally begins to remake himself – physically, emotionally and psychologically. Scoring press credentials, he becomes a war correspondent embedded with U.S. troops in Iraq and Afghanistan.

The once quite traditional reinvention of a man through warfare and machismo fantasies is now morally troubling, to say the least. But VanDyke finally ventures to Libya where he finally feels at home and socially integrated.

Returning to his girlfriend in the States, VanDyke’s adventure appears over until the Arab Spring. When revolution breaks out in Libya, he returns there to join the fight utilizing the skills he learned while living among U.S. troops. An engaged revolutionary, he is trapped in an ambush and taken prisoner by Gaddafi's forces. He ends up languishing in the ugliest depths of a Libyan prison for five and a half months. Finally liberated, instead of returning to the States, he remains in Libya and committed to the revolution. This is warfare as an elaborate selfie: traditional images of people in armed conflict consciously re-created for cell phones and video cameras.

Layers of reality and meta-reality swirl together in the vast Mixmaster of modern media. Fascinating in the richness of the mundane details of warfare, the film is more than troubling in its gliding sense of American privilege. The film ends with the triumph of that revolution, though we know the terrible troubles to come. Acknowledging its own vast moral ambiguity, the film is entirely fascinating but made me feel somehow deeply unclean.