On Any Sunday: The Next Chapter

The encyclopedic documentary On Any Sunday: The Next Chapter spans the globe, thoroughly covering the modern-day motorcycle from every angle to a fault. An update of sorts to the similarly named Oscar-nominated 1971 film that kick-started America’s love of two wheels and an engine, it feels oddly mainstream, even sanitized – no Easy Rider counterculturalism or Scorpio Rising fetishes here. Not surprisingly, the movie is directed by the son of famed documentary filmmaker, Bruce Brown, who helmed the original. (The ultimate surfing film, The Endless Summer, is among the elder Brown’s credits.) Motorcyclemania apparently runs in the blood. As depicted here, it’s a family affair above everything else.

The film’s cast of characters runs the gamut from überdaredevil Robbie Maddison, Australia’s 21st century Evel Knievel; to Marc Marquez, the Spanish Grand Prix motorcycle road racer and current MotoGP world champion who exudes rock star charisma; to Travis Pastrana, the X Games motocross gold medalist and founding impresario of Nitro Circus, the action sport collective once featured on MTV. Inspirationally speaking, the film also pays tribute to some lesser-known names in the world of motorized bikes, such as 21-year-old Ashley Fiolek, the cheerful female motocross champion who's been deaf since birth, and the Riders for Health, the charitable organization that provides motorcycles to doctors delivering health care in otherwise unreachable sections of sub-Saharan Africa. The movie’s democratic scope is admirable, but perhaps too much so. By giving every rider his figurative 15 minutes (actually, each profile runs about 10 minutes or less), it unwittingly dilutes the thrill of it all.

Watching On Any Sunday: The Next Chapter, you come to appreciate the “special kind of crazy” it often takes to ride and race motorcycles. What’s missing here is the full adrenaline rush associated with this dangerous but exhilarating sport and pastime. The documentary’s start/stop narrative structure never allows anything to accelerate full throttle. That’s a little surprising for a film produced and distributed by a go-go energy drink like Red Bull. Dust to Glory
The Baja 1000, the longest off-road race in the world, is captured on film by Step Into Liquid's Dana Brown. 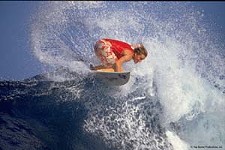 Step Into Liquid
Surf's up! It's The Endless Summer: The Next Generation.

On Any Sunday: The Next Chapter, Dana Brown