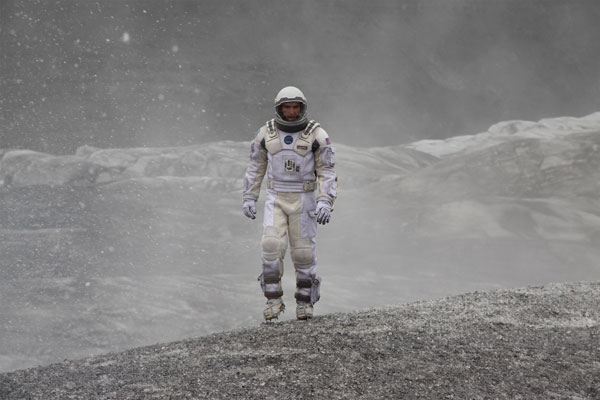 But how come … As a child, I regularly ruined the drive home from the movie theatre by asking my parents endless questions – about the characters and their motivations, about the plot and its implausibilities. I haven’t thought about that in a long time. I suppose I should thank Christopher Nolan for reconnecting me with my inner child. Certainly he’d like his film to inspire a childlike wonder – and there’s some of that, too, in Interstellar’s vivid imagining of outer space, in all its terror and pioneering possibility. At 169 minutes, there’s time to cycle A to Z through all the emotions and start back up again at the beginning of the alphabet.

But hey, time’s relative, amirite? Interstellar is about humanity’s last-ditch effort to find a habitable planet in another galaxy after it becomes clear that Earth is death-rattling. Matthew McConaughey plays single dad Cooper, who agrees to pilot the expedition, even though it means missing out on family trips to the ballpark and slowly choking to death from apocalyptic dust storms. Coop’s favorite child Murphy – played young by the tiny, raging Mackenzie Foy and as an adult by Jessica Chastain, poorly served by a script that mostly asks her to stare at chalkboards and floorboards, all a-muttering – will eventually turn into a mathematical genius who picks up Dad’s torch, even as decades pass without contact from him.

And in that sense, time is very concrete – and at times thrillingly conveyed – as the expedition members age at a different pace than loved ones back on Earth. The astronauts aren’t just worried with fuel economy, but time economy; think twice about scratching your ass, because you maybe just lost a whole year of your kid growing up. (It’s a succinct metaphor for anyone devoting himself full-bore to a career, to the detriment of a life.)

Not all is so economical. Nolan lavishes long minutes on an early car chase through corn fields to get to a 20-second long speech that can further be clipped to this – adapt or die. Still, it’s a nifty sequence, and blighted Planet Earth is a beaut in amber-colored film grain. So much of Interstellar, baggy and beautiful in ragged measures, comes qualified: Its science-y info-dumps sound so serious one suspects they’re actually very silly; even the most predictable plot turn zings with Nolan’s master hand at tension-building; and if the script is overly enamored with front-porch poeticisms and turgid monologues about love – oh, how the heart aches when a child cries for her father.

Interstellar is riddled with ridiculisms; the but how comes … never stop. And yet: Nolan, a notoriously chilly filmmaker who’s never shown much faculty with matters of the heart, is pinning that heart squarely on his sleeve. Boldly swinging for the rafters and face-planting half the time, he’s uncharacteristically willing to embarrass himself here. There’s a lot to admire in that. 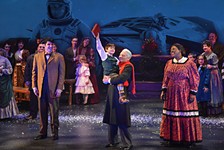 All Over Creation: Solstice Savings Time
How A Christmas Carol and Interstellar instruct us in surviving the holidays